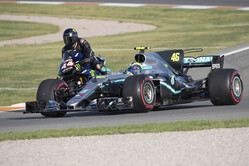 Valentino Rossi drove the Mercedes W08, the car Hamilton used to win the 2017 world championship, while the Briton rode the 2019 Monster Energy Yamaha MotoGP YZR-M1 bike that only weeks earlier had been piloted by the Italian at the same circuit.

The significance of the occasion was not lost on either Hamilton or Rossi who have made no secret of their admiration and respect for each other in recent years.

Acting as mentors for one another, the pair were able to complete multiple runs on each other's machinery, and share insights and learnings about each other's craft.

"It's so awesome to see a legend like Valentino in the car," grinned Hamilton. "I'm excited for him, for discovering the car for the first time.

"It reminds me of my first time in a F1 car. When you see all the team around you, it's just a different animal." 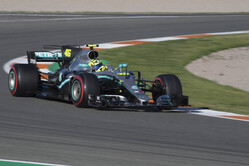 Of his time out on track riding the YZR-M1 with Rossi he added: "It was so cool to be out on track and see Valentino ahead of me on the same bike."

"I was a big fan of Lewis' before but now I am even more," said Rossi. "We had a fantastic day where the two top classes of motorsports not only met but worked together.

"I also rode the YZR-M1 on track with Lewis. It was a proud moment for the team to share our passion with him.

"Technically, Valencia is a hard track and today was windy so at one point I thought it would be difficult for Lewis to continue, but he was brilliant on the bike and his position on the M1 was great. I think he had loads of fun which is the main thing."

"It was an exceptional day," said Yamaha's managing director, Lin Jarvis. "To have Lewis together with us and Valentino, two icons of sport at the same time and place, was really amazing. I'm really happy that I could be there to witness it and to enjoy it.

"I was very impressed by Lewis' performance," he continued, "because how many four-wheel champions could come here and get on an M1, go out there, and do themselves proud? It's very difficult to ride a motorcycle fast on track and even more challenging and demanding to ride a factory MotoGP bike.

"What stood out to me the most was the moment when he and Valentino were out, really close together, side by side on their M1s. Lewis has said that he's been a fan of MotoGP and Valentino for years. It was his wish to ride on track together with Valentino and to have the experience one day to ride an M1, and he got both wishes at the same time!

"It was fantastic to see that even a six-time world champion who has already achieved so many things, can still realise a dream at a special occasion like this."