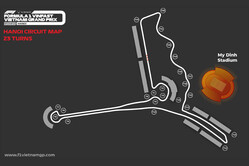 Organisers of the Vietnam Grand Prix, the third round of next year's record 22-race schedule, have revealed the revised layout to the Hanoi Street Circuit after increasing the number of corners to 23.

The tweak to the final section of the circuit will now see the total number of corners increase to 23 – making it the only track alongside Singapore's Marina Bay Circuit to have as many - with the track also extending from its original length of 3.458 miles (5.565km) to 3.484 miles (5.607km).

The slight change was decided upon after further consideration of the surrounding geographical conditions and has been fully supported by both F1 and the FIA, who have been working closely with the event organisers to ensure all changes have been carried out according to standard regulations.

The new Turn 23 is a 100% left turn where the track widens out again to 15m where it will lead on to the start/finish line for one last push by the drivers when they race in Hanoi for the first time next April.

The circuit, which fuses a street circuit's characteristics with a permanent track layout, is the first of its kind to be developed in partnership by Tilke Engineers and F1's own Motorsports Division, and according to organisers is set to become one of the most challenging and sensational circuits in the sport.

With high speed corner sequences not seen at any other pure street tracks and as many as three overtaking points, organisers are convinced that it will deliver spectacular racing.