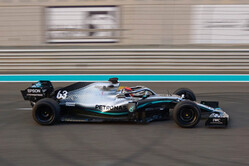 George Russell and Mercedes have concluded two days of 18" tyres testing for Pirelli at the Yas Marina circuit.

Following McLaren and Renault's test of the 18" tyres at Paul Ricard earlier this year, for the last two days Russell has been on duty for Mercedes in Abu Dhabi.

At the wheel of an adapted Mercedes, previously driven by Valtteri Bottas this season, Russell, who was in action for the German team during last week's two day test, completed 100 laps yesterday and a further 118 laps today.

The run programme is controlled entirely by Pirelli, with all the data gleaned from the test distributed to all ten teams.

There will be 25 days of testing during 2020 involving all ten teams ahead of a three-day day test following the season ending race in Abu Dhabi.