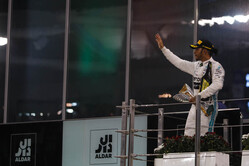 Mercedes driver Lewis Hamilton won the final race of the season with a one-stop medium-hard strategy, just like Red Bull's Max Verstappen in second. However, the third-placed Ferrari of Charles Leclerc adopted a different strategy, adding a final soft stint to his medium-hard run plan, to take advantage of the red tyre's extra speed in the crucial closing stages of the race.

Hamilton won from pole without losing the lead and was never troubled throughout the 55 laps. However, there was a close fight for the final two podium places behind him. The Englishman completed an impressive grand slam: pole, win, and fastest lap.

Ferrari chose to pit both of their cars twice, which were running different strategies from each other. On each occasion, the cars were double stacked in the pit lane, and both used all three available tyres - hard, medium and soft - albeit in a different order.

Mercedes driver Valtteri Bottas finished fourth after starting last due to a grid penalty, running a long initial stint on medium before switching to hard for the final stint. He ended up less than a second off the podium.

The longest stint was completed by Toro Rosso's Pierre Gasly, who switched onto the hard tyre following contact on lap one, and then ran it all the way to the finish: a total of 52 laps (as he finished two laps down).

A total of five different pit stop strategies were seen in the top 10.

The race lap record that had stood since 2009 was finally broken courtesy of Hamilton, who set the fastest lap of the race on the hard, with just two laps to go.

Mario Isola: "From a tyre point of view, with the three softest compounds in our range, we are satisfied with the overall performance here. We saw some long stints and low degradation, but also plenty of tactical variation and raw speed, with the decade-old race lap record finally broken on quite old hard tyres. This underlines the constant increase in performance we have seen in Formula 1 this year, which we have to bear in mind for the future. So now our focus turns to testing for 2020 and beyond as we remain at Yas Marina. On Tuesday and Wednesday all the teams will try out a range of 2020 tyres, with the opportunity to compare them to the current 2019 tyres. After that, we'll also be testing the 18-inch tyre for 2021 in the last of our private tests this year. Congratulations to Hamilton and Mercedes, not just for this emphatic race win but also for claiming both championships."