Hamilton: A long slog back to pole 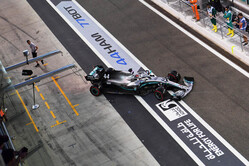 Ever since the summer break there have been little chinks in the Mercedes armour, little hints that the German team's long reign may be nearing its end... as reigns always do.

Along with a few poor strategic calls, there was the boost in performance (legal or otherwise) from Ferrari, and subsequently Honda, which saw Mercedes losing out, particularly in qualifying.

Then, two weeks ago in Brazil, in a flat-out drag race to the finish line, Hamilton's Mercedes was no match for Pierre Gasly's Honda-powered Toro Rosso, the Briton's frustration further compounded when a post-race penalty demoted him to seventh.

However, with both titles secured, the never-say-die Briton brought his long run of near misses to an end, claiming pole at the Yas Marina, his fifth pole of the season.

"It's been such a long slog trying to get this pole position," said the Briton. "We just kept our heads down, just continuing to try.

"The guys have been doing a great job around me, all the drivers," he continued, "so I was really just trying to focus on continue to do my job.

"Yesterday was quite wobbly," he admitted, "so I had to really recompose myself last night and come back today focused. I managed to really dial in the car with great work from the engineers, mechanics continuing to do a great job.

"Valtteri too has been rapid also this weekend," he smiled. "I'm glad that we're in this position.

"Of course to end the qualifying season with a pole, which has been a while, because we only had four I think earlier on this year. It's been a special car, and it's the last time I'll get to qualify with it, so I'm glad I did it proud today."