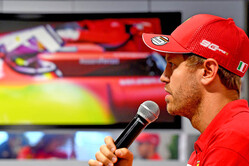 Understandably, and not for the first time, Ferrari is in the spotlight this weekend.

Ahead of the United States Grand Prix, in response to an enquiry from Red Bull, the FIA sent out a technical directive to all teams concerning fuel flow.

With the Italian team missing out on pole, and Charles Leclerc - its sole finisher - crossing the line almost a minute down on the winner, there was understandable speculation that the poor performance was related to the directive.

However, Max Verstappen was the only one willing to go public, the Red Bull driver suggesting that Ferrari's poor showing was as a result have being caught cheating.

Asked about the Dutchman's claims today, Sebastian Vettel was quick to respond.

"I don't think there is much to be said about it," said the German. "I think that comment was very immature, I ignore it because it is irrelevant. We want to answer on the circuit."

Admitting that Austin was "not a good weekend for us", Vettel insisted that "on top of the fact that we have a performing engine, we also have a car that I think is very efficient".

"For a couple of months, we are ahead," he added. "Hopefully, it stays like that for the next five years... and I don't care what people think or say.

"I personally don't have any motivation to prove them wrong," he replied, when asked about recent speculation over his team's remarkable improvement since the summer break. "I think we all know inside the team what we are doing and there's absolutely nothing wrong. And we are also confident that things will come back to normal here."