"I always love a challenge," says Hamilton of 2021 rules overhaul 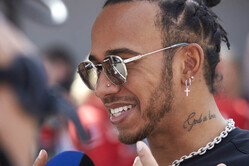 Though there remains uncertainty as to whether Mercedes will still be in F1 come 2021, a record seventh successive title for the German manufacturer in 2020 being the perfect time to bow out, looking ahead to the rules overhaul, Lewis Hamilton says he is relishing the challenge.

"I always love a challenge and this team has shown that they are better prepared and in the best position to be able to react to all the changes," he told reporters in the wake of the press conference at which F1 and the FIA presented the rules package.

"So I know the team are approaching it in an exciting way, and as a challenge," he continued.

"Us drivers, there were certain things that were heard and not necessarily were all the decisions what we thought were best," he admitted, "the cars are heavier, and slower.

"But I think it's going to be an interesting time," he insisted. "You've got the youngsters who are in town. I'm planning to be here then so at some point next year my mind-set will be to switch into 2021, and wanting to be the pioneer in that era."

Asked about his own future, Toto Wolff having recently said that talk of a move to Ferrari has been blown out of proportion, Hamilton said: "Nothing is obviously set in stone for the future, but I definitely am enjoying what I'm doing right now and I don't see any reason to stop because I love what I do.

"I don't particularly see myself going anywhere else. I love being here at Mercedes and I love being a part of the brand and the history."

Though there is speculation that a seventh title in 2020 could see Hamilton bow out, the Briton had a worrying warning for his rivals, insisting that he has not yet reached his peak.

"I never thought I would have five titles," he said. "If I am able to get a sixth one, it will be pretty unreal. I don't think I've hit peak yet and I plan to continue to get stronger."