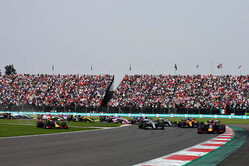 Following last Sunday's Mexican Grand Prix, which witnessed a hair-raising battle between Max Verstappen and Lewis Hamilton in the opening corners that eventually resulted in the Dutchman suffering a puncture as he rejoined the track and duelled with Valtteri Bottas, the Briton admitted that he tends to treat the Red Bull driver differently to his other rivals.

"Every driver is slightly different," said the Briton. "Some are smarter; some are like very smart, aggressive and some are silly with it.

"And so, through those experiences of racing with people, you give some more space and others you don't have to," he continued. "They're quite respectful. But, Max, it's very likely you're going to come together with Max if you don't give him extra space, so most of the time you do. But as I said, in my experience, I didn't have a lot of space to give him extra space. But I don't think it was intentional or anything like that. It was just... he's a magnet for those kind of things but yeah, nonetheless, I managed to keep the car together and in a straight line, fortunately.

"I obviously got torpedoed," he added, referring to the opening corners. "I thought at some stage I'd get torpedoed by Max."

Told about the comments in Austin today, claiming not to have heard about them previously, Verstappen described Hamilton's comments as "disrespectful".

"I think from my side it was a bit of a silly comment to make, because I think I'm always a hard racer, but fair," said the Red Bull driver. "I think it's just not correct. But of course it's easy to have a dig at someone.

"From my side, it's fine," he continued. "It's always positive when they talk about you because that means you're in their heads. I just focus on my driving, and I think that's enough said."

Asked if he feels that Hamilton and Sebastian Vettel are more aggressive with him than other drivers, the Dutchman said: "I think that from my side it already shows that I'm in their heads. I guess that's a good thing.

"But from our side, I don't need to dig into other people in a press conference, because first of all I think it's a bit disrespectful as well, and I prefer to fight on track, which I love to do.

"Of course I like to fight hard," he smiled, "but on the edge, otherwise, if they want me to stay behind, it's also better to stay at home.