A question of image (rights)

We previously revealed that media giant Motorsport Network is using the services of ImageRights, a copyright enforcement service, to claim money for images that we are alleged to have "illegally downloaded".

Citing 73 images in total, we were effectively told to pay Ł3,650.00... or else. ImageRights even helpfully included a link to a payment form.

ImageRights also provided a link to a page that included "a screen shot of the infringed image(s)", advising that once we had "reviewed the Settlement and Release Agreement" and selected the "Request Invoice to Resolve Claim", we should also "remove the infringing uses of the image(s)" from the Pitpass site and confirm by replying to their email.

On checking the page displaying the 'stolen' images however, we soon realised that all 73 had been sourced either from the teams' own media sites with full permission, or, in some cases, included in press releases sent to us.

We advised ImageRights of this fact but, clearly acting on the instructions of Motorsport Network, we were told to provide licence information for each of the 73 images along with "correspondence clearly showing that you have been given permission to use the imagery in question".

"Please note that you need to have secured a valid licence prior to the start of the use of any imagery to ensure that no copyright infringement is taking place," we were warned. 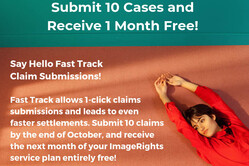 Ignoring our claim that the images had been downloaded from the various media sites with full permission, ImageRights (check out their Twitter flyer, right) persisted, and in reaction to their most recent email, received on October 14, we said that unless they desisted with what we considered to be a malicious, as opposed to frivolous, claim, we would have no choice but to contact the relevant teams.

We painstakingly went through each of the 73 images, and identified them as having come from the following sources: BMW, Brawn, Caterham, Ferrari, FIA, Force India, Haas, Honda, KHP Consulting, Lotus, McLaren, Mercedes, Pirelli, Renault, Sauber, Silverstone, Super Aguri, Toyota and Williams. Not forgetting Suttons, of which more later.

We wrote to Toro Rosso, Ferrari, Pirelli, Haas, Mercedes, Williams, Honda, Renault and Toyota, advising them that though we had downloaded images from their media sites in good faith, ImageRights, acting on behalf of Motorsport Network, claim that they had been downloaded illegally, effectively saying that the teams didn't have permission to share them.

To date, only Williams, Haas, Pirelli and Toyota have responded, but their replies make interesting reading.

"I would simply respond by stating to them it is a rights-free image taken from the Haas F1 Team media site (as taken by LAT - who WE pay) therefore you are not liable," wrote the American outfit.

"All Williams images taken by LAT up to 2018 that were taken from our site are copyright of Williams, so they don't have any right to do this. We own the copyright for media to access these for editorial use. That stands despite Williams not using LAT from 2019. Not sure what else we can do, but if the images were taken from our site then Motorsport Network are actually infringing on our rights. You could always refer them to Williams, as the copyright for images we paid for sits with us."

Pirelli passed our email to Steven Tee, managing director of LAT (the tyre manufacturer's contracted agency), advising that they were "sure he'll be able to shed some light".

In a follow-up email we were advised that Steven Tee had "said it was a mistake and not to worry about it".

We were told in a subsequent email that Pirelli would "ask Steve to drop you an email directly if that helps".

Though we said this would indeed help, we have heard nothing from Mr Tee.

LAT, incidentally, was purchased by Motorsport Network in October 2016 when it bought Haymarket, the company behind Autosport, the Miami-based media giant going on to buy Suttons in April of the following year.

The lack of a response from Mr Tee, not to mention ImageRights, combined with the responses from Haas, Williams and Toyota, suggests that behind the scenes there is a serious s***storm going down as the various teams and agencies discover that images they paid for and in turn supplied to the media are the subject of such an allegation.

Announcing the deal with ImageRights in September, James Claydon, managing director at Motorsport Network, and who is personally named in the allegation, told IPPro that "we are immensely proud of our photographers and the work they continue to produce, which is why we had to take action against image misuse.

"Not only do our images make us entirely unique, but they also are part of our identity, and ImageRights has empowered us to say enough is enough when it comes to copyright infringement."

As for Suttons, we are accused of illegally downloading 11 of its images.

However, even the most cursory of glances at the thumbnails page provided by ImageRights shows that the images in question bear the Suttons logo... a bit odd to include, you might think, when one is downloading a company's images illegally.

However, the reason they were downloaded and bear the logo is because they are from 2013, the year in which we revamped the site, and, also had a contract with Suttons. In other words, the images were paid for (see right).

Where this goes from here we do not know, but we have been accused of theft and threatened... and we don't like it. Indeed, it's about now one draws inspiration from the kind of put down young Mr Magnussen might come up with.

At a time the sport's powers that be are seeking to level the playing field, attempting to ensure that it isn't all about the 'big three', on the other side of the barriers, it is increasingly looking to be the big one, as Motorsport Network increases its hold on the sport.

While this allegation concerns 'just' 73 images, what about the many thousands of other images we and other members of the media have downloaded over the years, some of those involved in our case dating back to 2004.

With its archive of "over 23 million images" Motorsport Network can continue to offer clickbait galleries of every single podium scored by X, Y and Z, along with the various cars built by A, B and C, while ensuring that nobody else can get in on the act, and we're not just talking F1, as IPPro states, "Motorsport Images is part of the Motorsport Network and provides photography of all major current motorsport events, from Formula One Grand Prix racing to national level racing".

This is a company that in a few short years has branched out into various other areas including clothing, art, models, streaming, memorabilia, is the official supplier of the FIA's motor sport results and statistics database and even has a stake in Formula E, as does Liberty Global, 'sister' company to Liberty Media.

Like all monopolies, it is eventually the customer (the fan) who is the loser, and as Motorsport Network seeks to either buy up the opposition or drive it out of business (with malicious claims) so too the sport may well be damaged.

Make no mistake, Motorsport Network is about power, look no further than the cynical manner in which the iconic Autosport magazine is being treated, along with its loyal readers.

This situation goes way beyond Pitpass, but someone, somewhere has to make a stand, otherwise we may as well pack in and hand the whole thing over to Mr Zoi.

Indeed, as we await the next move from ImageRights and its client, we are minded of Martin Niemoller's chilling prose... "first they came..."