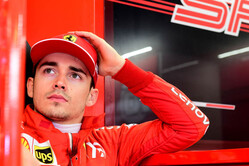 The first penalty of 5s was awarded to the Monegasque for forcing Max Verstappen off track on the first lap of the race.

Having viewed video evidence and spoken to both drivers, along with their team representatives, the stewards deemed that Leclerc and Verstappen were side by side as they entered Turn 1 and approached Turn 2 on the first lap, with the Ferrari on the inside.

As the cars approached the apex of Turn 2, Verstappen, who was marginally in front, stayed wide and allowed sufficient room to the inside but Leclerc lost front grip in the wake of the car in front and abruptly understeered towards the outside of the track, contacting the Red Bull and forcing it off the track.

While the loss of front grip on the Ferrari caused the contact and was not intentional, that loss of grip in close proximity to the car in front should have been anticipated and allowed for by the Monegasque, who was judged predominantly at fault for the incident.

In their opinion, the stewards felt that this was a somewhat unusual first lap incident, as only those two cars were directly involved, so few of the normal mitigating circumstances exist.

For this offence Leclerc was handed a 5s time penalty and 2 penalty points.

The youngster was further penalised for driving his car in an unsafe condition, in that he received front wing damage in the incident in Turn 2 and continued on after the incident and did not pit at the end of lap 1.

On lap 2, anticipating a call about the car, the team told the race director that it was calling Leclerc into the pits at the end of lap 2.

This piece of wing narrowly avoided an impact in the area of the cockpit of the Mercedes and destroyed its right-side mirror.

After this second piece detached, the team felt the car was now in a safe condition and despite previously telling the race director that the car would be called to the pits, they told car Leclerc to remain out and not to pit.

On lap 3 the race director called the team and directed the car be brought in to the pits for inspection. Leclerc pitted at the end of lap 3.

By not bringing his car into the pits at the end of lap 1, immediately after the incident for a safety inspection when there was damage clearly visible and then by telling the driver to remain out for an additional lap after telling the race director otherwise, the team created an unsafe condition on the circuit which only narrowly avoided being a major incident and also increased the likelihood of additional incidents after the one noted.

As a result, a 10s time penalty was imposed after the race in accordance with Article 38.3 d) of the FIA Formula One Sporting Regulations, while Ferrari was fined €25,000.

The two penalties mean that Leclerc drops from sixth to seventh, behind Ricciardo.

"Charles just drove into the side of my car," Verstappen told Sky Sports shortly after retiring. "From my side I don't think I could have done anything different there.

"We all know that you lose downforce behind a car so that is not an excuse, he's experienced enough to know that. For me, the weird thing is that initially they don't investigate it, the whole car was destroyed, there were just holes in the side of the car. Now they've started to investigate it but it's after the race, what more should he do to get a penalty? I like hard racing but this wasn't hard racing, just irresponsible driving.

"They had a bad start so he was trying to recover but there's only so much you can do in a very long race. It's a shame that it happened."