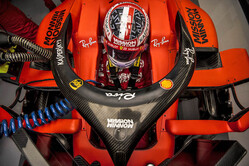 While Mercedes continues to tell us that Ferrari has the strongest package, based on the order in FP2, which could well decide Sunday's starting grid, the Maranello outfit is noticeably off the pace of the German team in Japan, with Max Verstappen also showing the Italian outfit a clean pair of heels.

Mercedes has brought its first upgrades for some time as it seeks to end a run which has seen its great rival claim four consecutive poles and almost as many wins.

"I think we made the most out of our day, which was the most important," said Leclerc, "but it seems we are lacking pace this weekend, which is a bit of a surprise.

"Because we were very strong in the last four races, we expected to be quite good here, but, yeah, it's less the case," he added.

"The long run was not great compared to Mercedes," he admitted, the Silver Arrows both lapping around a second quicker than the Monegasque. "I think we were quite okay compared to Red Bull, more or less the same, I need to check the data, I haven't checked everything.

Asked if the lack of practice on Saturday will further compromise his team, he said: "It's going to be difficult, realistically. But I believe that I didn't drive very well today, so I need to work on driving first.

"Then we've got a few set-up changes to do on the car, and hopefully putting everything together we'll do a step forward."

However, teammate, Sebastian Vettel was not so negative.

"It’s not as bad as maybe you think," said the German. "I think we were quite OK, just lacking overall pace. I think Mercedes is very comfortable straight from the morning, so it's not a surprise they were able to show that again in FP2.

"For us, I think we have a bit of room to improve," he insisted. "It wasn't an ideal session, maybe using our tyres not the way we could have. But overall, I think we'll see what we find. We'll stay indoors and see what happens on Sunday."