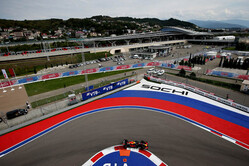 Ahead of today's opening practice session, the air temperature is 22.9 degrees C, while the track temperature is 25.3 degrees. It is overcast, but there is the threat of rain later in the day, and more over the rest of the weekend.

While we go into the weekend knowing that all four Honda powered drivers the main talking point has to be the ascendancy of Ferrari, put fully into perspective by Lewis Hamilton who now believes Mercedes really are the underdogs.

After all, should the Maranello team win this weekend it would mark the first time since the introduction of the hybrid formula in 2014 that Mercedes has 'lost' four consecutive races.

That said, on paper, despite the massive improvement from Ferrari, particularly in terms of aero, this circuit doesn't suit the SF90, then again we were saying that a week ago in Singapore.

The lights go green, and Norris is first out, followed by Verstappen, Stroll and Kvyat, who will start from the back of the grid following Honda's decision to introduce its latest upgrade. The three other Honda-powered drivers all face 5-place drops.

While Norris is on the hards, as is Kubica, softs appears to be the order of the day for most at this stage.

Bottas, who has mixed memories of this track from twelve months ago, is among the early risers, though the Ferraris, Hamilton and Russell stay put.

Verstappen, who pits before heading out again, is told to avoid the kerbs. The Red Bull driver is on softs.

"It's very bumpy, coming in and out of the pitlane," warns Raikkonen. Who, this weekend, becomes the third most experienced driver in the history of the sport.

Who remembers when Max Mosley and Jacques Villeneuve expressed serious concern at the lack of the Finn's lack of single-seater experience ahead of his F1 debut with Sauber?

Despite being late to the party, Russell splits the Racing Points with a 40.549, as Hamilton prepares to head out.

The conditions mean that the vortices from the rear wings are clearly visible, and the TV cameras seeks out examples from a number of teams.

Twenty-five minutes in and Hamilton finally emerges, just moments after the Ferraris.

Early problems for Kvyat who has stopped on track at Turn 15. The VSC is deployed.

Meanwhile, just ahead of the VSC, Leclerc had god gone quickest with a 37.593.

The session resumes and Hamilton slows in order to create a gap to the car ahead.

Hamilton runs wide at T1 and as a result is the first driver to experience the new 'slalom' initiative for drivers rejoining the tracks.

A spin for Giovinazzi, as Ricciardo is the latest driver to suffer a major lock-up.

Taking of brakes, Hamilton complains that his are "not working". The Briton is told that if he's unhappy with them he can pit... he duly obliges, almost colliding with a very slow Haas in the process.

Ralf Schumacher is a spectator at the rear of the Toro Rosso garage, his son, David, competing in the F3 race this weekend.

At the point where the extra set of tyres have to be handed back, it's: Hamilton, Bottas, Leclerc, Vettel, Hulkenberg, Gasly, Albon, Sainz, Ricciardo and Grosjean.

Shades of Vettel in Canada a few years back, as Bottas encounters a bird on the track that appears totally oblivious to the obvious threat to his life.

Moments later, both are demoted when Albon posts 35.878 to split the Mercedes.

Quickest in the first two sectors, though a little ragged in S3, with a slide exiting the final corner, Vettel goes top with a 35.005 on the softs.

Hamilton is back on track, now, like his teammate, on the mediums.

Verstappen can 'only' manage 35.237, which puts him around the same pace as the Mercedes pair but on softs rubber, and 0.775s off Leclerc's pace.

"Can we stop, try something on the front wing and go again," asks Leclerc. He is told that he can.

Verstappen improves to second with a 34.544, just 0.082s off the pace, as Leclerc, following the change to his front wing, appears to be focussing on race set-up. That said, it's a scrappy opening lap, the youngster only improving in the final sector.

That was an interesting lap from Verstappen, particularly as his softs were 8 laps old.

Sticking with the mediums, Hamilton posts a PB in S2, but fails to improve his overall time.

Hulkenberg and Ricciardo are currently seventh and eighth, ahead of Perez and Grosjean. Rivals McLaren have yet to show their hand.

Told to "box", Gasly, is told, "we need those tyres again, take it easy at the pit entry".

With 12 minutes remaining, Bottas, Russell and the McLaren pair have the track to themselves.

Not for the first time, Hamilton has to use the slalom run-off at Turn 1. Replays show Russell showing how it should be done, while Perez makes a complete pig's ear of it.

A spin for Kubica in Turn 2 momentarily brings out the yellow flag. Shortly after, Verstappen has a sizeable moment in the same corner, as does Magnussen, though both manage to avoid going off.

The top element on Bottas' rear wing appears to have collapsed. "Careful, careful, your rear wing has failed," he is told. "Box, box."

At which point, with perfect timing, the session ends... though not in time to prevent a spin for Ricciardo which sees the Renault driver hit the barriers at Turn 5 and dislodge his rear wing. He slowly makes his way back to the pits.