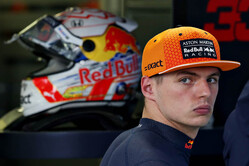 Though he faces a 5-place grid drop following Honda's decision to introduce its latest engine upgrade, Max Verstappen is remarkably sanguine about it.

Coming off the back of Singapore, where he did well to finish third, even though it was widely thought he would take his third victory of the season, one might have expected the Dutch youngster to be disappointed to learn that he faces a grid penalty before he's even turned a wheel at Sochi.

However, the Dutchman is convinced that despite the penalty he can still grab a decent points haul.

"Last year we started from the back and overtaking didn't seem like a big problem around here," he told reporters.

"Maybe the midfield teams are a little bit more competitive this year," he continued, "but it should be alright. You might lose a little bit of time to the guys ahead, but realistically speaking, I think you would anyway qualify fourth or fifth, so it's not anyway going to change a lot.

"I don't think it's going to hurt us a lot around here," he added. "It's not any more back of the grid, it's only five places. That's why I think we went for it."

Asked about Singapore, the youngster revealed results from the simulator were partly responsible.

"We went a different direction than the previous years, and it maybe didn't work out like we wanted to probably," he said. "There were little things with the simulator we could have done better.

"But at the end of the day, the simulator has helped us so much that one weekend where it didn't work out can happen," he concluded. "Unfortunately it was Singapore, but we'll look into everything to improve it for next year."