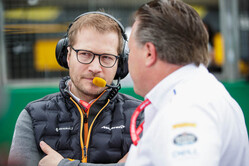 The Russian Grand Prix has been a regular fixture on the Formula 1 calendar since 2014. The race was one of the legacies of the 2014 Winter Olympics, which took place in Sochi, and the Autodrom utilises many of the Olympic facilities and passes alongside what was the Olympic village.

This year's race is the sixth world championship Russian Grand Prix, but there have been previous grands prix in the country: two races were held in St Petersburg, in 1913 and '14.

Carlos Sainz: "The three first races after the summer break have not gone our way but I'm fully confident we can turn this around. The car is performing well and the whole team is focused. There is no reason why we shouldn't keep pushing forward and luckily the next grand prix is just around the corner.

"The Sochi circuit is an interesting challenge with plenty of slow-speed 90-degree corners, similar to Singapore, but there are also more unique corners like the long left-hander from Turn Three to Five. I'm ready to give it my all once again."

Lando Norris: "We had a pretty good race last weekend in Singapore and now I'm looking to carry that momentum forward to the next race. We know that the midfield battle is tight and that making the most of unexpected opportunities is key to staying ahead of the competition.

"I'm excited to be heading back to Sochi, having driven there in FP1 and F2 last year. I'll be able to hit the ground running and start finding performance right from FP1."

Andreas Seidl, Team Principal: "Following an exciting race in Singapore, we head to Sochi looking to take the positives from the weekend into the Russian Grand Prix. We showed good race and quali pace in Singapore, proving that the upgrades we've brought throughout the season have done their job. It's now up to us to ensure we carry that performance into the final races of the season. We are committed to pushing as hard as we can to maintain our position in the midfield, however our long-term goal is to keep pushing forward into 2020. So now our task is to balance these two objectives and maintain perspective of the bigger picture.

"Heading straight to Russia from Singapore poses a significant operational challenge, however the whole team is focused on the task at hand and performing to the best of our ability this weekend. We head to Russia with our objectives clear."