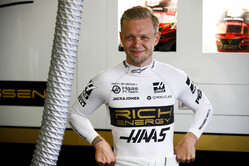 Trivia question: What driver currently holds the record for fastest lap in the Singapore Grand Prix? If you said Haas F1 Team's Kevin Magnussen, go to the head of the class. In his milestone 75th career Formula One start in last year's Singapore Grand Prix, Magnussen lapped the 5.063-kilometer (3.146-mile), 23-turn Marina Bay Street Circuit in 1:41.905 on the 50th lap of the 61-lap contest, shattering the previous track record of 1:45.008 set in 2017 by Mercedes' Lewis Hamilton.

Despite the accolade, Magnussen remain nonplussed, saying after his 18th-place finish: "It was a long day at the office. Obviously, it was a tough day for the team. I guess a slight highlight was getting the track record. It's not really worth anything but perhaps a smile. Let's move on, reset, and get ready to attack again in Russia."

There have been many tough days at the office of late for Haas F1 Team. Three races have passed since its last point-scoring performance in the July 28 German Grand Prix where Romain Grosjean finished seventh and Magnussen came home eighth. The 10 points scored on that day brought Haas F1 Team's season-long total to 26, and as the FIA Formula One World Championship rolls into Singapore for the 15th round of its 21-race schedule, the fourth-year American team is ninth in the constructors' standings, 25 points ahead of 10th-place Williams and eight points behind eighth-place Alfa Romeo.

But just as Magnussen's performance in last year's Singapore Grand Prix illustrated, there is no quit in Haas F1 Team. Each event, each practice, each qualifying round and each lap of each race brings opportunity. Magnussen seized on that opportunity last year in Singapore when he set that track record 11 laps short of the checkered flag, even as the gap to 17th-place Brendon Hartley was too much to overcome. Yet, Magnussen's post-race words proved prophetic, for in the next race in Russia, he drove to an eighth-place finish.

Of course, this is why we race, and Singapore is the latest opportunity for Haas F1 Team. After competing at power tracks in back-to-back races at Belgium's Circuit de Spa-Francorchamps and Italy's Autodromo Nazionale Monza, a street circuit provides a return to a new environment, as the last true street circuit teams visited this year was Monaco on May 26, nine races ago. And with the Singapore Grand Prix being run under the lights, there's always a chance to shine. Just ask Magnussen.

What are the challenges of the Marina Bay Street Circuit and how do you overcome them?
Guenther Steiner: "The challenges of the track lie in that it's low speed. It's more like Monte Carlo - it's a slower circuit. You have to take the lessons learned at places like that and try to get the best out of the car."

Singapore is one of only three night races on the Formula One schedule, but it's also the original night race. Do you like competing at night?
GS: "Night races, especially Singapore, are very cool. Being in the city and racing completely at night - it's fantastic. I think it adds a lot to the show. The time difference, being at night, it allows a lot of people around the world to watch it."

The at-track schedule seems to work well for the crews as well, for their body clocks stay on the same schedule as if they were in a European time zone. How important is it for crew members to stay on this schedule so they're able to optimize their time at the track while combating Singapore's heat and humidity?
GS: "For sure, it's an advantage. It's cooled down a bit most of the days when they're working because it's gone into the night, but staying on the same time zone helps them because we have to deal with so many changes over the year. If they can sleep during the day, then for sure it's an advantage for them. It shouldn't be as difficult as if it was held during the day there - it's easier."

The European races are over, and from now through the end of the season, Formula One is competing at an array of different tracks in an array of different time zones. How challenging is this final push through to the season finale at Abu Dhabi?
GS: "It's very difficult because there are a lot of changes in time zones. For me, luckily, I have two less because of Mexico and America, and I guess Brazil is very little change also. For the team though, to be coming out of Europe, there are a lot of changes. You're getting toward the end of the season and it's just like everybody's a little burned out. We've done it before, we'll do it this year, and next year we're looking forward to 22 races."

What are the challenges of the Marina Bay Street Circuit and how do you overcome them?
Romain Grosjean: "The main challenge is that we live by the night, so you don't get much sunlight. That catches up with you a little bit by the end of the week."

Singapore is one of only three night races on the Formula One schedule, but it's also the original night race. Do you like competing at night?
RG: "I like it. I think it's really good fun, and it looks good on the TV footage. Seeing that snake of lights through the city is really cool. In terms of spectating, I think it's really good. You can enjoy the day in Singapore and then watch the race in the evening."

Because the Singapore Grand Prix is at night, is there a heightened sense of speed?
RG: "Not really, it doesn't change much. The lights are really well done. For us, it's almost easier to have almost the same light throughout the circuit."

Singapore's layout forces drivers to run close to the track's walls for the majority of a lap. While the margin for error is always low in Formula One, is it even lower at Marina Bay Street Circuit?
RG: "That's a definite yes. It's like Monaco. There are a couple of laps in qualifying where you really push your luck and the limits. The rest of the time you need to respect the circuit."

There are 23 turns at Marina Bay Street Circuit, the most of any Formula One venue. Which ones are the most treacherous and why?
RG: "All of them. It's really a challenging track. There isn't any particular corner that is harder than any other. They're really all very challenging."

Between the bumpy track surface and the heat, how physically taxing is the Singapore Grand Prix and what do you do to prepare for it?
RG: "It's definitely the hardest circuit in terms of temperature, heat, concentration and length. The race normally goes to the two-hour time limit. That's a big challenge with Singapore. I don't really do anything special to prepare for it. I just keep my routine and try to go there as fresh as I can."

Singapore is one of only three night races on the Formula One schedule, but it's also the original night race. Do you like competing at night?
Kevin Magnussen: "I think it's pretty cool racing at night. The light makes the cars look shinier, brighter. It looks cool on the television. From the cockpit though, it doesn't seem that different. The track is actually more lit up than a day race because there's no shadows."

There are 23 turns at Marina Bay Street Circuit, the most of any Formula One venue. Which ones are the most treacherous and why?
KM: "There's no one corner that could be described that way. I'd say turns 12 and 13 are difficult. You have to brake and turn at the same time for turn 12. You turn in and then you have to go on power, and you need to be really precise on the throttle on the exit of turn 13 to get as much traction as you can without hitting the wall."

Between the bumpy track surface and the heat, how physically taxing is the Singapore Grand Prix and what do you do to prepare for it?
KM: "It's really a physical race for a few different reasons. One, it's really hot. Two, you don't ever really get any rest on the lap. You're constantly working the steering wheel. There's not a lot of straight line on the track. Three, because the average speed of a lap is so low, the race usually goes to the two-hour time limit. It's the most physically demanding race of the year. As for preparation, I just do my normal thing with my fitness training."

In addition to its physicality, is the Singapore Grand Prix mentally exhausting because of the close proximity of the walls, its multitude of turns and high safety-car frequency?
KM: "It is mentally exhausting. You need to be fully focused the whole time - maybe even more than a normal race - because you're constantly in a corner around the lap. Just with it being more physically demanding, it's more mentally demanding. They go hand-in-hand. It's a tough race, for sure."