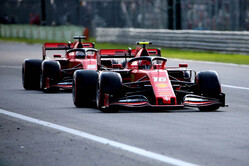 Charles Leclerc will start the 90th Italian Grand Prix, the 70th as part of the Formula 1 World Championship, from pole position. The Monegasque posted a time of 1'19”307 at the wheel of the number 16 SF90, beating Lewis Hamilton and Valtteri Bottas into second and third places. Sebastian Vettel will start from fourth on the grid. On his second run in Q3, he was unable to improve on his first, because of traffic which meant that the majority of the cars out on track crossed the line at the end of their out lap after the chequered flag had been shown.

The 12 minute top ten shoot-out was unusual to say the least. On his first run, Charles did a 1:19.307, while Sebastian's best was a 1:19.457. Soon after, the session was red flagged after Kimi Raikkonen went off at the Parabolica, restarting with just over 6 minutes to go. What happened next was very strange, as with just two minutes remaining, everyone was still in the pits, as no driver wanted to lead the slipstreaming train of cars and not get the advantage of a tow. As the drivers jockeyed for position, the clock ticked down and the majority of the cars never crossed the line in time to start a flying lap. Sebastian was one of those caught out, which left him fourth. This was Leclerc's fourth pole of the season and of his F1 career, following on from those in Bahrain, Austria and Belgium. It was number 224 for Scuderia Ferrari.

Charles Leclerc: "Of course, it felt amazing when I came out of the car and heard our tifosi cheering from the grandstands. On the other hand, it is a shame for Seb who had the potential to do first or second, and I think that as a team we deserved that today. It was quite a messy qualifying session, especially in Q3. In the last few minutes, we found ourselves in an odd situation at the exit of the second corner where two cars were blocking our way. Seb overtook me there, because I think that he was aware that we were tight on timing. After this, I tried to find the best tow and then overtook Seb before the last corner to give him the tow back, but unfortunately, it was too late to achieve what we had planned.

"Looking at the race, our pace looked quite strong in FP2 and the gap to our competitors is smaller than it was in Spa-Francorchamps. DRS and tow are very important here in Monza, so the target will be to create a gap in the first three laps that is big enough not to see them again!"

Sebastian Vettel: "I was happy with the car which was really good, and I was also pleased with my lap today, but I cannot be happy with how qualifying went. At the end of Q3, most of us didn't make it through to the second attempt. The lap I did on my own without a tow was good. I think we went out late and then obviously you look for a tow, but it's clear we waited too long, so in the end there was no margin.

"At the end I just had no choice but to miss my last lap because the light was already red, so I'm obviously disappointed. But from fourth on the grid there are still plenty of chances to do well. Let's see how it goes tomorrow."

Mattia Binotto Team Principal: "We understood right from yesterday's free practice that today's qualifying would be very close and that slipstreaming would play a key role. The situation in Q3 was truly abnormal: it's not often you see the majority of the cars being shown the chequered flag without having been able to do their quick lap, but that is the inevitable consequence of the strategy of waiting until the very last moment to make the very most of the aforementioned slipstreaming.

"It was a shame for Seb, who just missed out on starting his flying lap by the tiniest margin, because being fourth, he was the driver with the most to lose in this situation. Having said that, today our cars were quick and clearly we are very pleased with this pole position, especially as it came here in front our of fans at our home race."