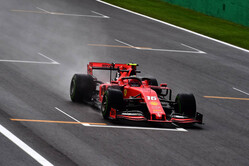 The circuit has dried since this morning, however it remains overcast, and beneath the oak trees that line much of the track there remain a few puddles. Indeed, there is an 80% chance of further rain.

Having gone off in FP1 without posting times, Perez and Raikkonen will be keen to get some decent track-time in the ninety minutes that follows.

With rain expected, it is unsurprising that when the lights go green there is a mad scramble to get to work, Bottas one of the first to head out.

A fair mixture of all three compounds.

A 22.847 sees Bottas go top as all but Norris, Perez and Magnussen are on track.

"Warm the brakes," Sainz is told.

Albon is the first driver to get the dreaded first chicane wrong.

Sainz improves to fourth with a 22.952, as Ricciardo runs wide at Ascari.

Raikkonen continues where Albon left off, cutting the first chicane after a lock-up.

"Rain is expected in around fifteen to twenty minutes," Verstappen is warned.

Magnussen is last to head out, and as he posts 25.042 to go 19th, it leaves Norris as the only driver yet to post a time.

Verstappen splits the Ferraris with a 22.343, as Sainz is best of the rest, ahead of Albon and Hulkenberg.

In quick succession, Perez and Bottas both cut the first chicane.

Thirteen minutes in and there is activity in the stands as fans don their plastic macs.

Despite going quickest in S2, Hamilton fails to improve his overall time.

The leading four, Hamilton, Bottas, Vettel and Verstappen are all on mediums, while fifth-placed Leclerc is on softs.

As Vettel switches to softs, Leclerc, on a fresh set of the red-banded rubber, goes quickest in all three sectors, crossing the line at 20.978.

Ferrari probably doing some early qualifying sims with an eye on the weather.

As he pits, Magnussen clips the wheel jack.

Having gone quickest in S1, a small mistake at the second mistake and traffic mean he can 'only' manage 21.179, 0.201s off his teammate's pace.

Albon improves to fourth with a 21.589, ahead of the Mercedes pair, who have yet to run the softs. Gasly is seventh, ahead of Grosjean, Ricciardo and Kvyat.

"The track is slippery," reports Albon.

Indeed, the rain begins to fall, and the drivers opt for the safety and comfort of their garages.

Despite nobody being on track, 35 minutes in the session is red-flagged as gravel deposited on the track following Magnussen's off at the second chicane is swept away.

When the session resumes the rain is still falling, consequently there is no mad scramble to get back to work.

Eventually, Grosjean heads out, followed by his Haas teammate. Both are on softs.

The Mercedes pair also head out.

Magnussen reports that at certain corners it is still too wet for slicks.

Both Haas drivers are lapping around 7s off their previous best.

Meanwhile, in the McLaren garage, work continues on Norris' car.

No sooner has Vettel switched to mediums that it begins to rain heavily in the pitlane.

"Rain at Parabolica," Bottas is warned, the Finn running nose-to-tail with his teammate.

Vettel is told that there will be "drizzle" until the end of the session.

As the Mercedes pair post PBs in S1, it is clear they are practicing tows with an eye on qualifying.

Talking of the Spa winner, the Monegasque reports that "it is raining quite hard, I will not take risks".

"We are expecting these kind of conditions on Sunday," Leclerc is told, "so keep running."

Times improves but remain 3 or 4s off the pace we witnessed earlier.

"14 timed laps to go in total," Hulkenberg is told, "we will need to box, we just want to see how far these tyres can go."

Norris finally heads out and gets on to the timesheets, the McLaren driver posting a 23.561 on the softs.

Leclerc takes a bumpy ride over the kerb at the first chicane.

Norris is told not to run too wide in the final corner, by order of the FIA.

Alonso is on the pit-wall with Zak Brown.

"It's dry everywhere apart from the back straight and the last corner," reports Norris.

Courtesy of a tow on the main straight Kvyat sweeps by Bottas, only to overcook it at the first chicane.