Vettel: I did the job 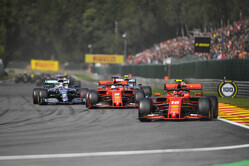 Losing out to Lewis Hamilton in Turn 1, on the run up to Le Combes, as has become a familiar sight in recent years, the German was able to sweep past the Briton's Mercedes.

Though unable to keep pace with his Ferrari teammate, Vettel's fortunes appeared to change following his pitstop. Though his initial pace was lacking he soon began to pick up speed and found himself on target to catch up with the leading Ferrari when the Monegasque pitted.

However, no sooner had Leclerc, Hamilton and Bottas all pitted, 6 to 8 laps later, than Vettel, now leading, was warning that his tyres would not last the distance, and with his teammate showing better pace, he moved aside for the youngster.

Sure enough, he pitted again on lap 33, however, in the laps before his second stop he backed up Hamilton, costing the Briton an estimated four precious seconds as he sought to reel in Leclerc, Hungary-style.

"I didn't have the pace," said Vettel. "I was struggling to stay on top of the tyres which normally is not a problem. So it was a tough race.

"Obviously from some point onwards, from the first lap onwards, it was clear we won't be in the fight," he admitted. "So all I could do by then was serve the team.

"I was struggling in the corners so that allowed him to get close," he said of Hamilton, "and then I couldn't hold him off for very long. I tried to obviously make him lose time in order to give Charles a cushion. In the end there was just enough so I did the job.

"After Seb stopped... actually I completely lost where I was," said Hamilton of his pursuit of Leclerc. "I was obviously trying to keep up with him but he was very strong on the soft tyres and we just stayed out too long, I think, because by the time he came in and the next lap the gap was twice as big. So I was chasing that up and also I got stuck behind Seb."

"Seb has been very nice," said Leclerc, "without him I think it would have been a lot more difficult to win this race... so thanks to him."