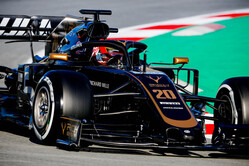 The Haas F1 Team duo both successfully advanced to Q2 as part of the top-15 after an eventful Q1 that was red-flagged twice for mechanical issues by other cars on track. Grosjean turned the ninth-fastest lap of 1:45.694 and Magnussen the 11th-fastest lap of 1:45.839 around the 7.004-kilometer (4.352-mile), 19-turn circuit. It was the third event in a row both Haas F1 drivers advanced to Q2.

Romain Grosjean: "We got the best of the car today, both drivers, so that's great. Since the beginning of the weekend we haven't really been comfortable with the car. I think this weekend has showed some of the weakness we have, but that's good as we have a very clear vision of where we need to go for the future – that's the positive part. On the more negative side, I think our race pace isn't there, so I'm a bit worried for tomorrow. We have an issue with tire usage, not because of the tires – we know they have limitations, but when you don't have the downforce to go with it, it just makes things worse. Hopefully the changing weather will be to our advantage.

Kevin Magnussen: "I would say we can be happy today. After yesterday we didn't expect to have any pace today, but on the other hand, you do have it in mind that things can turn on their heads overnight because these tires, for us at least – as we all have the same tires, it's very difficult. We don't seem to be able to work the tire in the right way for whatever reason, I don't think it's a lack of tire knowledge really, because I'm not sure anyone completely understands these tires, I think it's just something somewhere in our car that doesn't suit them. It can make all the work you do in the background a little bit irrelevant, as you can turn around with different results every day, every session. It's a little bit frustrating, but today going P10, starting P8 tomorrow, we'll take that."

Guenther Steiner: "I would have signed on for today's qualifying positions if you'd offered me them yesterday as we were struggling. The team did a good job to get the car back. I don't think there was a lot more in the car other than what we took out of it today. So, we will start eighth and ninth, which is fantastic compared to where we were yesterday. Tomorrow the weather will change and maybe we'll get a little bit of attrition, and maybe we can take some points home."