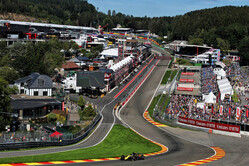 Nico Hulkenberg and Daniel Ricciardo negotiated the 7.004km Spa-Francorchamps track undulating through the hills and forests in the heart of the Ardennes forest, with Daniel finishing the day in a strong eighth position and Nico thirteenth.

During the morning FP1 session both cars completed aero evaluations to assess small updates, while FP2 took a slightly different path to the usual Friday plan, with Nico and Daniel evaluating the Soft and Medium tyres as opposed to Hards.

We ran with a low downforce package today to give us greater straightline speed going down on the straights. The car also ran with updates to the rear suspension and minor weight-saving gains on the bodywork. New Spec C ICEs equipped with minor changes to improve performance and reliability were used by both Nico and Daniel. As it is Nico's sixth change of the season and Daniel's fifth, both drivers will take five-place grid penalties for Sunday's race. The weather forecast looks stable for the weekend with conditions likely to be dry and warm throughout.

On the whole, a promising day. We have a little work to do to understand why Nico could not improve on new tyres in FP2, but overall we have a lot of positive data to go through tonight.

Nico Hulkenberg: "Our morning was decent and the afternoon started okay, but this afternoon was a bit strange. The car seemed to get worse throughout FP2 on the Soft tyre runs so we need to investigate why. We have some work to do on short and long runs, but we're getting ourselves back into the routine of a race weekend again. Nevertheless, it's nice to be in the car after the break at this great track."

Daniel Ricciardo: "It was a pretty good day and it's nice to get back into it. The break didn't feel too long and everything felt very normal on a whole. We were in the top ten for both sessions, so I think we've started on the right foot, but we have a little bit more to find. We probably didn't make as much progress as we'd have liked in the afternoon. We're there, with just a few bits and pieces to work on. Other than that, the track's good, the weather is good and we'll see what happens."

Nick Chester, Chassis Technical Director: "Overall we made some good progress today, working on the aero balance and set-up across both cars, while getting some data on the medium and soft tyres. We are not quite there with balance just yet: Nico wasn't able to improve on new soft tyres in FP2 so we will have a good check of his car to understand why we lost some pace after his first run. On the medium tyres, at the start of FP2, the drivers were quite well matched. Daniel's long run pace was pretty good in FP2 and we need to concentrate on first lap balance for tomorrow."