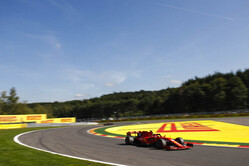 The weather was dry and warm today, with track temperatures peaking at 40 degrees during the afternoon. The circuit was in good condition, with the tyres behaving exactly as expected. As is often the case in Belgium, there was a big difference in track temperature between the morning and afternoon sessions.

Similar to last year (where Ferrari was fastest in every session apart from Q3) the team topped both FP1 and FP2 with Sebastian Vettel and Charles Leclerc respectively.

The difference between the medium and soft compounds - which will be used predominantly in the race - is around a second per lap here. The hard compound wasn't used much today so it's difficult to predict the gap accurately, but we estimate it to be in the region of 1.5 seconds.

Usually, there is quite a lot of residual rubber put down by the Spa 24 Hours, held last month. With the 24-hour race having been held under a lot of rain though (which even led to a lengthy stoppage) there was little rubber already on the track.

No blistering or graining was seen throughout the day, on one of the most abrasive surfaces in the entire championship.

Mario Isola: "Today was largely what we expected from Friday in Belgium, with quite a change in track temperature from the morning to the afternoon, and a significant degree of track evolution in FP1. However, the track was generally in good condition, which enabled a lot of representative data to be collected. We saw long runs on both the soft and the medium tyres during the afternoon, in roughly equal proportions. The weather forecast suggests cooler conditions for the race on Sunday; one reason why the teams focussed on medium and soft tyres, although we can't of course exclude the possibility of the hard being used as well. With the big demands that Spa places on tyres, teams will be monitoring the levels of degradation closely as they refine their strategies. We've seen a reasonable amount of degradation on the soft tyre today, so a large part of the work from here on will be optimising the car balance on the soft tyre, in order to make the most of this compound during the race."