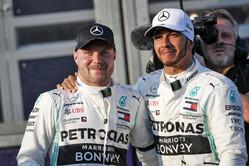 Having revealed earlier in the week that team members at Brixworth - Mercedes power train HQ - had worked "straight through the summer break to improve the performance and reliability" of the team's power unit, the German manufacture has confirmed that an upgraded unit will be available for the works and customers teams at Spa this weekend.

"Works teams and customers planned to run a new phase PU, barring any unexpected surprises between now and practice," said a Mercedes spokesperson. "Testing at the factory has shown improved performance and reliability."

The upgrade follows the previous upgrade which was introduced in Canada, and while Honda is only making its latest-spec engine available to two drivers - Alexander Albon and Daniil Kvyat - it's understood that all six Mercedes-powered drivers will have the new unit.

Though most drivers are still within their permitted allocation, it is understood that Lance Stroll will incur a grid penalty, the Canadian left out of sequence following the engine failure he experienced during practice in Canada.