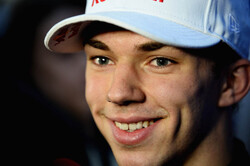 Pierre Gasly: "The summer break is over and I am back with my Italian family for the rest of the season and I'm happy to be working with Toro Rosso again. I've had a couple of weeks to rest and train to get ready for the nine upcoming races so I can give my best performance for the team.

"It was nice to have that time off to reflect on the first half of the season, but now I'm fully focussed on the rest of the season and ready to get going again. We have been busy with preparations for the rest of the season this week, I went to the factory to meet with my engineers and have my seat fit, trying to be as prepared as possible for the weekend.

"It's going to be great racing again after the break, especially on my favourite track of the season at Spa. It's a track I really enjoy and have had great races there in the past. I had my first win in single seaters there in Formula 4 and I also won the Feature Race in GP2 back in 2016.

"Now the main focus is on extracting the maximum of the car until the end of the season with Toro Rosso. I'll do my best to bring as many points as I can for the team to help defend our position in the Constructors' Championship."

Daniil Kvyat: "The summer break came at just the right time with the arrival of our little girl the day before the German Grand Prix, whom we named Penelope. So, the holiday for me was about spending as much time as possible at home, but also maintaining a good level of fitness.

"I had a short trip to St Petersburg just before it was time to head for Spa. It was a very nice trip organized by our friends at Red Bull Russia, to meet fans in my home country, which unfortunately I do not have the opportunity to visit as often as I would like. It was great to receive such a warm welcome from so many people and I hope to be back soon.

"Otherwise, I was always around the house in the Monaco area and amongst all that, I found time to do enough training and recharging my batteries. I have to say it's been an interesting time as, at the moment, I'm very new to this life with a baby and so I enjoyed spending time with my family.

"Moving on to Spa, of course, it's a great circuit with so much history and so many quick corners, it's those long corners where you really enjoy driving a Formula 1 car. From the actual racing point of view, it's also great and you can have nice slipstream battles up to Eau Rouge. It's just an exciting place to be really. It's a long lap but, that doesn't affect my approach and you just drive through it as fast as you can, hopefully, it will be an enjoyable weekend for us. A couple of weeks off has been nice, but now I'm looking forward to going racing again."