Ocon: Being at the track ensures I'm not forgotten 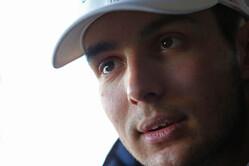 In a single session of simulator work over a Grand Prix weekend, Esteban Ocon will often complete over 1,000 km (621 miles) in Brackley, before heading back to the circuit in order to be track-side.

The Frenchman believes that unless he is regularly seen at circuits he is in danger of becoming the sport's 'forgotten man'.

"I insisted I wanted to be at the track," he tells the sport's official website. "I don't want to be working at the sim and not come over.

"It's hard. It's definitely hard," he says of a schedule that can see him get less than half-an-hour's sleep after finishing his simulator work and then heading to the track for FP3. "But it's alright.

"There's much worse in life," he adds. "And I can sleep early on Saturday night and get rested for Sunday.

"It helps me understand from a team point of view what a team wants from a driver," he says of being with the team on race weekend. "This is the aspect I have learned the most.

"Spending a lot of time with the team, listening more to the team than to the drivers. I'm plugged to the wall, working in the sim. I'm hearing a lot more from the team, than the drivers. I hear 35% the driver and the rest is all the team. I see what they need from a driver, and also the way they want to approach things.

"If you're not at the track, people will forget you," he says. "This is also probably a part of why we didn't go somewhere else this year. Our target is to be back in F1. My only goal is to be in F1.

"Of course, if it doesn't work next year, I will have to look at something else," he admits. "But it's not the target. This is also the reason why I'm staying here every race. I want to stick to F1, stick to the team, so that no one forgets me."

Ahead of the summer break, Toto Wolff admitted that the choice of teammate for Lewis Hamilton in 2020 is a straight choice between Ocon and current incumbent, Valtteri Bottas.

With memories of Hamilton's intense rivalry with former teammate Nico Rosberg in mind, clashes such as Barcelona 2016 likely to cause Wolff to wake in a cold sweat at least one night a week, many feel that Mercedes will want to maintain the status quo. Though clearly a gifted driver, during his time at Force India, Ocon regularly clashed with teammate Sergio Perez, gaining a reputation as a hard-as-nails racer but not a team player.

With this in mind, it comes as no surprise that Hamilton has admitted a desire to retain Bottas for another season.

Losing out to Daniel Ricciardo when the Australian made his shock decision to join Renault last year, it is looking increasingly likely that Ocon will partner the former Red Bull racer at the French team in 2020, replacing Nico Hulkenberg.

"It was not an easy thing," he says of losing out to Ricciardo last time around. ""We talked with Toto and my management side in Mercedes and they told me not to worry, I would be having a chance in F1 in the future.

"Of course there were phases where it is a bit quiet so you doubt things a bit, but discussions started quite some time ago, so I'm pretty confident it's going to be OK, fingers crossed and touching wood.

"The only job I have to do is to perform properly from what the team want in the simulator," he says of his current role. "At the moment, that's what I'm doing.

"We had a lot of discussions on what I should do and where I should improve and if the guys were happy. From the amount of driving and hours I do, I'm definitely taking a lot of knowledge from that. Also as a driver, it's going to help me with focus. I do so many hours at different times of the day. We're looking for between one or two-tenths during more than 200 laps. It's very hard, but it's good and I'm happy I'm doing it."