"He's not in the mix," says Horner of Gasly 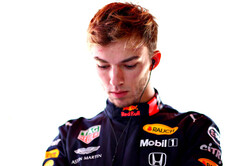 There was a brief time when it looked possible that Valtteri Bottas might still have some say in the outcome of the Hungarian Grand Prix.

Though a problematic opening couple of corners, that included two significant lock-ups and getting clouted by Charles Leclerc, put paid to a podium finish, later in the race the Finn found himself about to be lapped by Max Verstappen at the height of his scrap with teammate, Lewis Hamilton.

Shortly after Hamilton's botched move on the Red Bull driver which ended in the Mercedes running wide, Bottas was advised that the approaching Dutchman had Hamilton on his gearbox. Wisely, the Finn moved aside for both.

However, over at Red Bull, Verstappen's teammate, Pierre Gasly was running his own race, battling Kimi Raikkonen and then Carlos Sainz, a fact that was not lost on team boss, Christian Horner.

"It's been a frustrating weekend for Pierre," Horner told reporters after the race. "The start wasn't great, the first lap wasn't great, and we shouldn't be racing Saubers and McLarens.

"We need him to be racing Ferraris and Mercedes," he continued, "and everything we can do to help him to achieve that is what we will do."

Asked if the Frenchman can still save his seat, and thereby his F1 career, Horner said: "I think he really needs to take some time out during the summer break, reflect on the first half of the season and take the lessons from that into the second half of the year.

"It's vital for us if we are to stand any chance of catching Ferrari that we have him finishing further ahead.

"Our intention is to leave him the car until the end of the year," he added. "But we desperately need to see him realising more of the potential of the car."

Referring to Mercedes strategic move which turned the race on its head, Horner said: "The problem is he is not in the mix at all, so it's not like if Lewis pitted he was going to come out behind him or anything like that.

"Today, both Mercedes and Red Bull had one-legged races with the teammates out of contention," said the Briton.

When it was suggested that Red Bull has far more such races this season, Horner agreed: "Yeah, absolutely," he said. "Obviously not having two cars running at the front does hurt us, particularly in the Constructors' Championship where we scored the same amount of points as Ferrari today on a track where we should have taken more out of them."