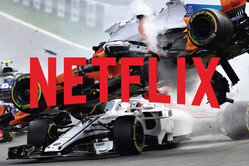 Formula One Management has confirmed that there will be a second series of the popular Netflix documentary, F1: Drive to Survive.

The behind the scenes series proved a great success with its coverage of the 2018 season, attracting not only confirmed and casual F1 fans, but some who had never previously given that much thought to the sport.

Today FOM confirmed that the series will return in 2020 with its coverage of the 2019 season.

"Drive to Survive will once again take fans behind the scenes with the drivers, team principals and owners, to gain a unique and raw perspective on their lives both on and off the track, showcasing the tension and the glamour of the sport as each team fights to win the championship," proclaimed the official press release.

Furthermore, though they played no official role in season one, both Mercedes and Ferrari will participate in series 2.

"We are thrilled to once again be working with Netflix on the second series of Drive to Survive," said Ian Holmes, Director of Media Rights at Formula 1.

"It is a truly unique series which allows fans to see the unseen side of F1, showcasing the personalities and emotions each team and driver goes through, both on and off the grid.

"Drive to Survive has enabled us to reach an entire new fan-base globally and partnering with Netflix for a second season ensures we are continuing to put fans at the heart of what we do and make the sport more open and accessible to all."