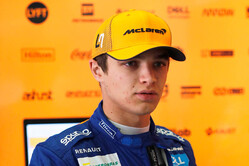 Hockenheim was built in 1932 and it first hosted the German Grand Prix in 1970. Back then, Hockenheim's layout was a 12km/7.5-mile triangle, which was shortened and slowed by chicanes during the following decades to slow the cars.

A full re-design of the circuit took place in 2002, and it is that layout which remains to this day. The re-profiled track retained its famous Motodrom section, and with it much of its original character.

Carlos Sainz: "It's been an interesting first half of the season and I'm determined to keep pushing as hard as ever before the summer break. There is still a long way to go in the Championship, but all our focus is on the next stop – Germany! Hockenheim is a classic track on the F1 calendar and we head there aiming to keep our momentum up.

"I spent some time with the team back in the factory after the British Grand Prix. Everyone back in Woking is working flat out and their efforts have been key to staying competitive within the midfield. Let's keep up the good work!"

Lando Norris: "I really enjoyed the whole experience around my home grand prix, even if the result wasn't quite what I was hoping for. I'm now looking forward to getting back on track in Germany.

"I've raced at Hockenheim a few times before in junior formulae, but I'm excited to race there in an F1 car for the first time. It's a cool track and I've had some good experiences there in the past. We're working on improving the car at every weekend and every session is crucial to that development, so I'll be looking to hit the ground running from FP1 onwards."

Andreas Seidl, Team Principal: "We've had some positive results in the last few races, but we know there is no room for complacency if we want to keep moving forward and there are always improvements to be made. The race at Silverstone proved how close the midfield teams are. Despite the good result at the British Grand Prix, there are still clear areas to work on and we aim to make progress at every single race. Heading into the final back-to-back before the summer break, it's important that we keep our focus during this busy period and push right up until the factory shut-down in August.

"It will be a special moment for me as we head to my home country. Germany has many motorsports fans who deserve to see a good race and I hope the future of the event can be secured soon.

"From a team perspective, we remain motivated towards giving Carlos and Lando the best possible tools for them to do their job. It's a collective effort that starts back at the factory and ends at the track when we send our cars out on race day, and we're always looking at how we can improve."