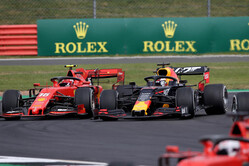 Speaking at the start of the Silverstone weekend about the incident in Spielberg, which saw his clash with Max Verstappen described as a "racing incident", Charles Leclerc said the decision was fair yet inconsistent.

"We just need to know what we can expect from the others," he continued, "and on that, I think that's why I would like probably more consistency on the penalties.

"I'm happy that we can now race like this," he added. "I just want it to be consistent. If it's consistent, I'm very happy to be racing like this. As drivers, we always try to be as close as the rules limit us to be. So I will definitely change a little bit and adjust a little bit my aggressivity."

Come race day he was true to his word, thrilling fans with his elbows out, wheel-to-wheel battles with Verstappen, even in the pitlane.

"Austria was quite an eye-opener for me to understand how far we could go and what was accepted and I'm very happy at the end to race like this," he subsequently told reporters.

"Every driver wants to race hard," he continued, "and that's what we did during most of the race.

"It was very, very fun," he grinned, "always borderline, but I think always in the rules and very, very enjoyable from the car.

The pair even went side-by-side down the pitlane at Silverstone, after coming in together for the stops, with Verstappen pulling out at more or less the same time as Leclerc.

"That was definitely the most fun I've ever had in my Formula One career," he admitted. "Well, it's a short career, only one year and a half, but it was definitely very, very fun from inside the car."