Vettel mystified by lack of progress throughout qualifying 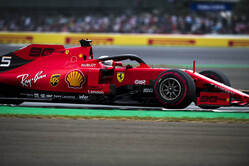 While Lewis Hamilton admits to his pace deteriorating throughout qualifying, Sebastian Vettel admits to being mystified by his car's performance, saying that he was unable to get on top of it and failed to improve his pace over the course of the three sessions..

"At least I took part," he told Sky Sports, referring to the fact that his strategy in Q2 almost saw him miss the cut. "I just didn't have the speed," he continued. "Usually it's pretty clear that you go faster from Q1 to Q3 without doing anything, but that didn't happen today.

"I struggled to extract what was in the car," he admitted in a subsequent team media briefing. "I couldn't get the right feel, I'm not happy with how it went. It didn't look great on my side, I struggled to feel the car today, just couldn't get on top of it in time."

"From my point of view right from Q1 I wasn't able to extract any more from the car, we hovered around the same times. We struggled to squeeze out everything from the tyres, from the car. It's fair to say we were just doing the same from Q1 to Q3, I wasn't really going with the track, unlike anyone else."

Asked about his prospects for the race, having qualified behind the Red Bulls, he said: "Mercedes should be the favourite, but I think we'll have a fair battle with the Red Bulls, and take it from there."

And asked about his teammate, he said: "I think he did a good job but for me I don't really have an answer now. I think it's fairly evenly spread, he seems to gain a bit everywhere.

"I didn't really have a great feeling this afternoon and part of it, around here you need a bit of it to throw the car from one side to the other."