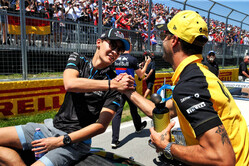 Dave Robson, Senior Race Engineer: The hottest day of the weekend threw up some new challenges and led to many drivers managing their car, be it for brake temperatures, tyre degradation, or engine temperatures. Fortunately for us we had most things under good control and were able to race cars around us. For George, this meant that he was able to race Magnussen and, until his retirement, Albon. For Robert, who struggled more this weekend, we opted to make a second stop and use our full complement of Prime tyres.

We made some small improvements to the car this weekend, and we managed a difficult race well. The team continue to do a very good job with the pitstops and both drivers again completed well-constructed races and brought both cars home with no damage.

Robert Kubica: Unfortunately, there is no magic. Yesterday the handling was difficult, but today was harder. I had no grip with high fuel, hotter conditions and longer stints. Overall grip is missing, we know it's like this, so we are not able to push.