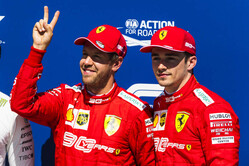 The question over the next hour isn't so much who will take pole, and indeed the other positions at the front of the grid, but tyre they will do it on.

Tyre degradation has already been an issue for most drivers this weekend, and with tomorrow expected to be considerably warmer, it is anticipated that drivers who will want to get on to the harder rubber as soon as possible.

Indeed, with drivers hoping to avoid the red-banded softs, we could see the Ferraris and Mercedes try to qualify on the mediums, a move which could play into the hands of Red Bull.

That said, the Bulls are up against it this weekend, and rather than challenging Mercedes and Ferrari could well have their hands full as the fend off the attention of the Renaults, McLarens, Haas', Toro Rossos and Racing Points.

The struggles with their tyres has seen a number of drivers make mistakes, not least the best of the best, Lewis Hamilton, and surely this can only add further spice both this afternoon and tomorrow.

While Mercedes is clearly the better handling car, Ferrari has an 8 km/h advantage on the straights, according to Toto Wolff, though over the next hour we should get to see the new Mercedes engine stretch its legs.

Not in Lance Stroll's case however, for the Canadian has had to revert to the old-spec unit following the engine failure in FP3 which prevented him posting a time. No doubt a sobering thought for the Mercedes drivers also... especially as they reach for those magical engine modes for the first time.

First out of the box is Kubica, winner here in 2008. He is followed by teammate Russell.

Stroll is another early riser, his crew doing a great job of changing his engine during the break.

Leclerc is the first of the big guns to emerge, followed by his teammate.

The Mercedes duo join in the fun, as Verstappen goes second with a 12.018.

Verstappen and Gasly are looking set to improve, Verstappen posts 11.619 to consolidate third while Gasly aborts his lap after a poor second sector.

Ricciardo goes seventh, ahead of Norris, Kvyat and Perez.

No sooner has Hamilton gone second with an 11.518, than teammate Bottas goes quickest with an 11.229.

Vettel responds with an 11.200 and Leclerc an 11.214 as Ferrari continue to make the softs work for them.

With 3 minutes remaining, Albon, Grosjean, Raikkonen and the Williams pair comprise the drop zone. Sainz, Giovinazzi and Hulkenberg are hovering.

A late improvement for Grosjean who goes eighth and Albon who goes sixth with a 12.020.

Hulkenberg, Sainz are now in the drop zone, with Perez only just above them.

Magnussen posts a PB in S1 as he seeks to improve on 13th. Ricciardo is also on a strong lap, as are Hulkenberg and Sainz.

Magnussen goes tenth, while Stroll goes 14th only to be demoted when Sainz improves and then Ricciardo.

A late improvement from Kvyat is bad news for Perez, who fails to make the cut along with his Racing Point teammate. Raikkonen is also out, along with the Williams pair.

The Mercedes duo are first out for Q2, a puff of smoke from Bottas' car as he heads down the pitlane.

As the Silver Arrows begin the flying lap, the Ferraris head out.

Hamilton posts 11.336, the Briton, like Bottas and the Ferraris, on the mediums.

Bottas aborts his lap, Mercedes having sent the two drivers out very close together, as did Ferrari.

Vettel goes quickest with an 11.309, while Leclerc has also aborted his lap following a mistake.

Verstappen is also on the mediums, as Bottas goes third with an 11.487.

Having gone wide at the chicane, Leclerc didn't rejoin the track as he should have, which could cause problems.

Hulkenberg goes fourth and Sainz fifth, which is bad news for Verstappen who is demoted to sixth.

On the softs, Gasly goes quickest in the first two sectors, as Verstappen fails to improve and has slipped down to 11th.

As thought, Leclerc is to be investigated for that incident at Turn 8.

As Verstappen complains about traffic, teammate Gasly goes second with an 11.196, thereby splitting the Ferraris.

Quickest in the first two sectors, Hamilton, on a fresh set of mediums, goes quickest with an 11.010.

Bottas is also looking set to improve as he goes quickest in S1, with 4 minutes remaining, Verstappen, Giovinazzi, Kvyat, Albon and Grosjean comprise the drop zone.

Bottas goes second with an 11.095, despite a poor final sector.

Kvyat fails to improve but has time for another lap. Similarly, Albon improve his time but remains 14th.

Verstappen has had to go out on the softs, which will compromise his race strategy. Though not as badly as if he fails to make the top ten.

The timing screen is awash with green.

A big crash for Magnussen who loses his car in the final chicane.

The session, which was already over, is red flagged, which is bad news for Verstappen, in particular, and Magnussen's teammate, Grosjean, who both fail to make the cut.

Ironically, Magnussen is through, but will play no further part.

Replay shows the Dane clout the Wall of Champions, and then, with his suspension clearly damaged, spear across the track to hit the pitlane wall.

"I can't believe my luck," moans Grosjean, who is informed that his lap - his only lap of the session - was looking "very good".

Understandably, there is a delay as the stricken Haas is removed from the track and the debris cleared.

As he begins his flying lap the Frenchman has exclusive use of the track.

Vettel heads out, followed by Hamilton, Bottas and Leclerc.

Bottas spins at Turn 2 and does well not to hit the wall after losing the rear of the W10. The crowd applauds his car control as he subsequently heads back to the pits.

Hulkenberg goes fourth (12.108), ahead of Gasly, Ricciardo and Sainz.

Leclerc goes for a second flying lap, but in S2 he appears to abort the lap.

Gasly improves to fourth ahead of Hulkenberg with an 11.569.

Hamilton heads out for the final assault, followed by Leclerc and then Vettel.

Bottas is behind Norris and looking to find a gap.

Surprisingly, Leclerc is told that he's losing time on the straights.

Hulkenberg improves to fifth, but is demoted when Bottas posts 11.101.

Leclerc improves but remains third, Hamilton also improves (10.446) and appears to consolidate his position, but Vettel responds with a 10.240 to take pole.

It's been a long time coming, and understandably the German and his team are delighted.

Amazingly, at the death, Ricciardo banged in an 11.071 to take fourth, and Gasly an 11.079 to go fifth, thereby demoting Bottas to sixth.

"I'm full of adrenaline!" grins Vettel, the German having appeared to resurrect his annoying ringtone celebration of the Red Bull years. "You know the feeling in the car when you feel the grip and just go for it, it was just one of those laps."

"Honestly, we gave it everything we could, they were just quicker," adds Hamilton. "This is good, this is how racing should be. I'm glad I was able to split the Ferraris. Hopefully we can put on a good show tomorrow."

"I felt good in Q1 but I struggled today in Q3 with the set up," admits Leclerc. "Hopefully we'll have a better race tomorrow. We are strong on long run pace so hopefully we can have a good result."