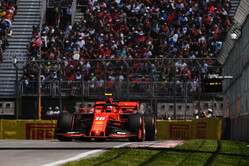 Montreal is always a track with plenty of evolution, but this year the surface was even more slippery and dusty than usual, with very little grip during both free practice sessions.

Even the top drivers were caught out by this: Mercedes driver Lewis Hamilton and Red Bull's Max Verstappen were among those hitting the wall, with Hamilton out for most of FP2 (missing out on both hard and soft tyre running).

Despite the tricky conditions, the fastest FP2 time, set by Charles Leclerc who headed a Ferrari one-two on the soft C5 tyre, was marginally quicker than the corresponding time from last year (set on the 2018 hypersoft, which is roughly equivalent).

Conditions were warmer than is often the case in Canada, with ambient temperatures peaking at 29 degrees centigrade, while maximum track temperature was 47 degrees. Similarly warm or even hotter conditions are expected over the rest of the weekend.

Most of the running this afternoon took place on the softest compound, with drivers completing a full programme of race and qualifying simulations, with short and long runs.

So far, the performance gaps between the compounds are hard to accurately estimate, due to the high level of track evolution. The predicted gap is expected to be roughly 0.8 seconds between each compound.

Mario Isola: "So far we've seen a less than typical Canada in many ways. Temperatures have been higher than usual, and the track also seems to have been more slippery than normal: it's hard to know if those two facts are connected. We're expecting more warm weather over the rest of the weekend, which will have an effect in terms of wear and degradation, on a circuit that always has quite high traction demands. As a result, the drivers will need to manage thermal degradation carefully, especially at the rear, which will have an effect on qualifying and race strategy."