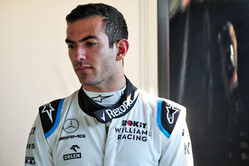 We are ready to hop across the pond to North America for round seven of the 2019 Formula One World Championship. Montreal has the unique privilege of breaking up the European leg of the season and a city that grinds to a halt over the race weekend as fans from around the world descend on Quebec.

Robert looks forward to driving in Canada once again, a race he has had previous success at having taken victory there in 2008. George, meanwhile, makes his first appearance in Montreal, having never previously driven the Circuit Gilles-Villeneuve. Finally, the team's Reserve Driver, Nicholas Latifi will drive the FW42 once again, this time during FP1 in front of his home crowd.

Dave Robson, Senior Race Engineer: For round seven of the Championship, we leave Europe once again and head to Montreal for one of the most enjoyable races on the calendar. Situated on the Notre Dame Island, alongside the rowing lake built for the 1976 Olympic Games, the Circuit Gilles Villeneuve always leads to some exciting and close racing. Overtaking is easier than at many circuits and the weather and tyres often play a significant part in the race strategy. In contrast to Monaco, most cars will run lower downforce to increase their straight-line speed and therefore their race pace. However, this can come at the expense of qualifying laptime as well as tyre management. As a result, we can expect to see a range of set-up solutions.

Following his successful testing appearances in Bahrain and Barcelona, our Reserve Driver Nicholas Latifi will drive Robert's car during FP1. This is Nicholas's home race and we look forward to some strong local support on Friday. Nicholas will be involved fully in our race preparations, and alongside George will conduct some important testing of new components during FP1. For FP2 onwards Robert will return to the track and refamiliarise himself with the circuit which played host to his maiden Formula One victory in 2008.

Robert Kubica: Montreal is a great city and one of my favourite Grands Prix. Although it was a long time ago, I have good feelings there and I am excited to return. It is a unique track, very demanding and can be quite tricky. I am looking forward to racing once again in Canada, let's see what we can achieve this weekend.

George Russell: I am really looking forward to the Canadian Grand Prix as I hear that it is an amazing place. I enjoy driving new circuits and it looks like a very fun and unique place to drive. Off the back of a few positives in Monaco we are hoping to continue our momentum getting closer to the rest of the field.

Nicholas Latifi: I'm really excited to take part in my first FP1 session with the team. The fact that it's at my home GP will definitely add an extra bit of excitement but nonetheless the goal still remains the same. I want to do a good job for the team and give them the feedback they need to guide them going into FP2. I feel really well prepared after the three days of in-season testing I have had, along with all the work I have conducted at the factory this year, I can't wait to hit the track!