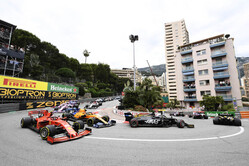 On a weekend that the sport mourned the loss of one of its favourite sons, many were hoping that spirits would be lifted by an F1 fairy-tale.

In only his second season in F1, Charles Leclerc was racing on the streets of his home town at the wheel of his beloved Ferrari.

However, what should, and could, have been a fairy-tale result in the Principality where once a Hollywood star had reigned, became a horror story when the youngster was forced to retire due to accident damage.

Clipping the barriers as he made a move on 11th-placed Nico Hulkenberg, the youngster sustained a puncture. Having to complete a whole lap of the track before he could pit for a replacement, rather than taking his time and managing the tyre, the red mist descended and Leclerc raced back to the pits, eventually causing the tyre to shred and cause damage to the car's floor which in turn seriously compromised its handling.

"It was impossible to drive at a normal pace," said the youngster. "I think the damage was too big.

"We tried to do a change with the front wing to try and compensate for the lack of downforce we had because of the damage, but it was just not enough," he added.

In his post-race analysis of Sunday's events, F1 technical boss, Ross Brawn, says that while Leclerc's move on Hulkenberg was impetuous, be blamed his team for putting the youngster in that position in the first place.

"Leclerc, for a handful of laps, was truly spectacular," said the Briton. "Then he went too far and paid a high price for his impetuousness.

"His reaction was understandable however," he admitted. "It's his home race and his first attempt at it with a front-running team. It was supposed to be a special moment but it ended only in disappointment.

"After some problems on Thursday, Saturday morning's final practice session offered a ray of light when he topped the timesheets. But then came the slap in the face of that Q1 strategic error, which Mattia Binotto fully admitted was a team miscalculation, and he dropped all the way down to 16th, a starting position that led to him overdoing it on Sunday.

"The season seems to be getting away from the Maranello team," admitted Brawn, who oversaw numerous titles with Ferrari, "but it's not the time to give up and it must learn from its mistakes if it wants to move forward."