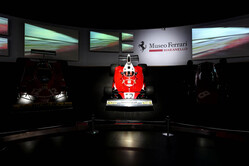 Ferrari is to drop its controversial Mission Winnow branding for the Canadian and French Grands Prix.

"Scuderia Ferrari will once again be celebrating the 90th anniversary of its foundation, over the weekends of the Canadian and French Grands Prix," said the Maranello outfit in a brief statement.

"Therefore, as was already the case in Australia, the SF90s in Montreal and Le Castellet will carry the logo celebrating the anniversary, as will the drivers and mechanics overalls."

Carefully adding that "Mission Winnow remains the title partner for Scuderia Ferrari in 2019", the decision to drop the controversial branding, which is for Philip Morris' products that are an alternative to tobacco, vaping, the decision is more about the strict laws regarding tobacco advertising in those two countries rather than actually celebrating the team's history.

Nonetheless, the "90 Anni" exhibition opened at the Maranello Museum just a few days ago and it runs until April next year.

At the exhibition visitors can admire a selection of cars on which the Ferrari motor racing legend has been built, from the Alfa Romeo 8C 2300 Spider, which in1932 was the first to carry the Prancing Horse emblem, to the 500 with which Alberto Ascari took two consecutive world titles in 1952 and 1953, Niki Lauda's 312T to the F2004, which won a record 15 out of 18 races and the SF71H that Sebastian Vettel and Kimi Raikkonen raced in 2018.