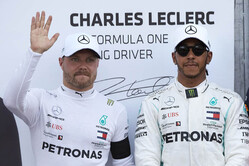 Lewis claimed his 85th Formula One pole position - his second of the 2019 season and the second of his career in Monte Carlo. Valtteri will start tomorrow's race from P2 on the grid - his best-ever grid position in Monaco.

Today's result marks Lewis' 59th pole position with Mercedes in F1, making him the driver with the most pole positions for a single team ever.

Both drivers will start tomorrow's Monaco Grand Prix on the Soft tyre.

Lewis Hamilton: This is one of the best poles I can remember. We've had a lot of success over the years, but I can't really remember a pole that means as much as this one. It's been such a difficult week for the whole team and me personally. It's amazing that we've turned up here as a team, continuing to take strides forward together collectively, get stronger and improve our performance weekend in, weekend out. I'm just so proud of everyone. We have a cloud over us this weekend, so we're really trying to lift each other up and we're trying to deliver for Niki. I have not had a huge amount of success in Monaco over the years, I never quite got that perfect lap, but I think today was as close as I can get to it. This one is for Niki.

Valtteri Bottas: I definitely felt like I had the speed to take pole today. My first run in Q3 was quick, but I had two or three tenths in my pocket. I was stuck in traffic on my final out lap in Q3, so my tyres weren't warm enough for the second run. As soon as I started the lap I could feel that they weren't gripping and I saw during the lap on the screens that Lewis took pole. For me personally that's annoying, but for the team it's another incredible result. We have a long race ahead of us and anything can happen tomorrow. The run into Turn 1 is very short in Monaco, so it's tricky to make a difference there, but I will keep pushing and use every opportunity that might come up.

Toto Wolff: I'm really happy. We struggled a bit to understand how to best prep the tyre to warm them up and get them into the temperature window. We had to decide between two laps or one lap to prepare them, but in the end we found the right formula. Valtteri had a sensational first lap in Q3, but he hit some traffic on the out lap for his second run, so his tyres were a bit too cold and he didn't have enough grip. Lewis put in a fantastic second lap and managed to get pole. It's a shame for Charles; I think he had it in him for to fight for front row in his home race. The weather forecast keeps changing, but the latest I heard was that there's a 60 percent chance for rain in the race, so it should be exciting tomorrow.

Andrew Shovlin: Well done to the team on another front row and to Lewis on a great lap for pole. I'm fairly sure that it would have looked more straightforward from the outside than it really was. The Soft compound is not easy to get going here and we'd realised on Thursday that we would need a fast out lap; which in Monaco means an out lap in free air. Everyone seemed to run early in the first qualifying session, so we were too cold starting the first lap, both cars were then struggling to get clean laps until much later in the run when the tyres were well past their best. The second session is always a bit more straightforward with fewer cars on track and Valtteri started to put some really nice laps in. Lewis was finding it hard to get the tyres to work for lap one, his second session was a bit messy. We hadn't quite decided what we were doing by the final session, Lewis trying lap two, Valtteri lap one, but the time Valtteri put in made it clear we needed to go for the first lap. The final lap in qualifying is so important here and so it proved today. Lewis was able to get the tyres into the right range and put together a good lap for pole, Valtteri was held up on the out lap by the cars around him and started the lap a bit cool, which ultimately meant he couldn't improve. Whilst the front row is important here, it's also Monaco and anything can happen. The tyres are also quite marginal for a one stop so we're not assuming that we will have an easy time tomorrow and will work hard overnight to make sure we are as well prepared as we can be.