Binotto: What we did was not wrong 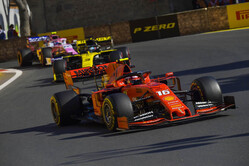 Whatever the rights and wrongs of Ferrari's strategy, in terms of Charles Leclerc, the fact is that despite the fairy-tale result many were hoping for, the Monegasque's hopes ended when he crashed in Q2 on Saturday.

Starting the race on a new set of mediums, when all around were on softs, only compounded the problem - no pun intended - and as a result Leclerc was never realistically in the hunt.

Indeed, he admits that when he did eventually pit on lap 34, there was never any hope of a fight-back, rather a strategy that would allow him to pit again later in the race and go for the fastest lap, the youngster stressing that the stint on softs following his first stop was not indicative of the SF90's pace.

"I think a lot of people thought we were struggling, which I don't think we were, because I just didn't push to try and close the gap," he admitted.

"I asked on the radio pretty early in this run whether there was any possibility to come back to the guys in front, and the answer was no because the gap was too big. From that moment onwards it was just about trying to keep the tyres and try to push for the fastest lap when I had the opportunity to do so.

"Don't look at the pace from when we put the softs, it's not our real pace," he insists, "we were just trying to do the best lap.

"I am disappointed because I felt great in the car," he added. "I completely agree with Mattia, I think in the car has definitely the potential to do pole position and I threw all our chances away by touching the wall, it is my mistake, I take the responsibility, and today basically it was the best we could do from there.

"It's a bit disappointing, but on the other hand I think there are some positives to take away from the weekend. I think qualifying pace was definitely stronger than China and race pace was also very close to Mercedes. Now we look forward, and I'm pretty sure we will come back even stronger in Barcelona."

Asked if the youngster, as many believe, was left out too long and should have been pitted earlier, Binotto said: "Certainly, maybe yes, it could have been a different gamble, maybe stopping earlier on those tyres or trying to last very long on the medium. But you may always discuss different solutions at the end of the race looking back. But overall what we did was nothing wrong, let's say.

"Yesterday I think we got a good car for qualifying," he added. "Potentially we could have been on pole. We didn't.

"I think that the races are certainly a different matter," he continued. "The reason of it is a different day as first. I think that being in front or staying behind, it is quite different to manage your pace, your tyres. When you have got fresh or clean air certainly it is a lot easier, so I think that our pace as well today has been as well affected by our position on the grid, at the start, but not only that, certainly the others are very strong and we are facing a very strong competition.

"Obviously four races into the season, and no win for Ferrari, four wins for Mercedes, no doubt they are very strong," he said. "Certainly they have got a slightly better car, but I think that the gap is not so big and the points of the result are not reflecting the true potential of the cars."