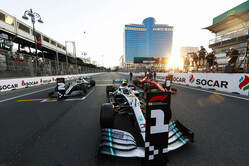 As the safety barriers were being repaired following Charles Leclerc's crash in Q2, broadcasters were already speculating as to who might join the remaining Ferrari, that of Sebastian Vettel, on the front row of the grid, such had been the pace of the SF90 all weekend.

However, a combination of factors, not least a cunning ploy from Mercedes, was to see the Silver Arrows lock-out the front row against all odds.

The first part of the triple whammy was the loss of Leclerc himself, who had been the class of the field all weekend, regularly showing the Mercedes pair, and his own teammate, a clean pair of heels.

Then, as a result of the delay to proceedings following Leclerc's crash, which in turn followed the delay after Robert Kubica's off, as the sun began to lower in the sky, so temperatures began to fall, which played in to Mercedes hands.

Finally there was the masterstroke, the cunning ploy that did for Vettel and Ferrari.

As we know from experience, in the final stages of Q3 it is customary for drivers to want to be the last out, often leaving it worryingly late, sometimes even leaving it too late and failing to get to the chequered flag in time to complete that final lap.

However, Mercedes sold Ferrari the perfect dummy when it sent both its drivers out first, causing Ferrari to react and send out Vettel in hot pursuit.

Yet while the Ferrari headed down the pitlane and out on to the track to begin his out-lap, many were confused by the fact that both Mercedes pulled over to perform ‘practice starts'.

"About your fake starts in Q3," asked the German in the subsequent press conference. "Did you do a start or did you just stop?

"Well, did you do a start or did you just stop?" asked Vettel.

Fact is, Mercedes had sold Vettel and Ferrari the perfect dummy, sending its two drivers out safe in the knowledge that its Italian rivals would react. However, they then stopped both cars for "clutch calibration", leaving the German to head out first with nobody to give him a tow. The rest, as they say, is history.

"You always need to evaluate between trying to get a bit of a tow effect and compromising your out-lap," explained team boss Toto Wolff at session end. "You can see how wrong it can go in Shanghai when some of the cars that weren't able to cross the line.

"In each of the qualifyings we saw a little bit of a pattern, that everybody waited for us to go out," he continued, "and this time we thought we've got to try something else, and this is what we did. We decided it this morning."

However, the cooling temperatures played their part.

"I think we gained relative performance with the dropping temperatures," said the Austrian. "I think that probably with the track and ambient of this morning they were in a league of their own, and once it got cooler, probably the competitive order changed.

"But when you see this kind of gap, it's never the car has suddenly lost performance, because you know there is performance, it's just that you're not having the tyre in the right operating window. The longer the session went, the more we got it there, and towards the end, from a car that was not making the drivers happy in the morning, we ended up with a car in Q3 that was good.

"He was out by himself with no tow," he said of Vettel, "and the ambient temperatures and track temperatures came towards us at the end. Our car got better the colder it went."

"It was a tough call," admitted Vettel. "When the track temperature dropped the car balance changed and getting the tyres to work for that one lap, especially after such a long straight before starting the lap, was not easy.

"With the clock ticking down, everybody was banking on the last run and getting a tow so at some point I had to make the call, do I prioritise my tyres or the tow? It would have meant compromising the out-lap and I didn't have the feeling that I could afford that and I wanted to have a clean shot.

"My first Q3 run was OK, he continued, "but on the second run I didn't have anybody to tow me along, so I dealt with it just focusing on my lap and obviously I lost quite a lot, about four tenths, compared to the previous lap.

"But that's what happens at this track. It was a tricky session."