Grosjean: Bahrain issues down to tyres 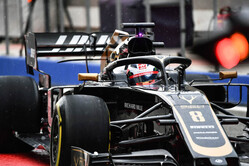 Having qualified sixth and eighth, much was expected of Haas drivers, Kevin Magnussen and Romain Grosjean in Bahrain. And while the Frenchman was compromised following a three-place grid penalty it was still expected that the American team would leave the desert with a double points haul.

However, while Grosjean was eliminated 16 laps into the race following the inevitable first lap 'tangle', this time with Lance Stroll, teammate Magnussen had his own problems, the Dane struggling for pace and eventually finishing a distant 13th.

"We were so good in qualifying," he continued, "so the car has to be good, but today something wasn't right and we need to work hard to try and understand what went wrong as we clearly have a good car when it's working."

"We knew we had a high downforce package here so it's not such a big surprise but we thought we'd be fast pace wise. We were so slow and with the straight-line speed we had it was just impossible."

Teammate Grosjean reveals that the post-Bahrain test shed more light on the issue.

"Bahrain wasn't our best showing in terms of race pace," he admits. "Unfortunately, that was the feeling I had from the Friday of the weekend.

"We didn't quite manage to get on top of it," he continued. "Saying that, I didn't do much of the race, so it's hard to judge if what we had done on my car was good enough.

"Our test in Bahrain has been a good opportunity to learn a bit more about what happened in the race," he adds. "It has to be tyre-usage related because the car is the same as we had in Melbourne and in pre-season testing, where we were fast and we were fast again in qualifying in Bahrain.

"We've got the downforce and we've got the balance, we just need a little bit more cooperation on the tyres. If we can process the information from testing, we should be fine for the race."

That said, China has not exactly been a happy hunting ground for Haas, though Grosjean is confident this time around.

"Shanghai is a tricky track because it's very different from the early stages in the year," he said. "It's a front-limited circuit, meaning that the car needs to work well with the front tyres. If it doesn't, then it gets very tricky.

"Overtaking in Shanghai is not impossible. There's the long back straight with DRS helping overtaking manoeuvres. In general, if the car is good in qualifying, the race should be quite good too. If not, then in the race you're going to struggle. If you qualify in the top-10, you should finish in the top-10. If you're not, then it's harder. I've had good cars in Shanghai, therefore I've been able to score points.

"I think its going to be great," he concludes. "It's a very different circuit and I think we've got some good tools to get ready for China."