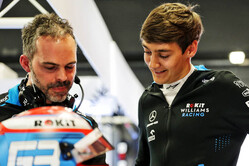 It's off to China for what is sure to be a momentous weekend as the race in Shanghai not only marks the third event of the 2019 season, but the 1000th race in the sport's history. Celebrations are planned both on and off the track and, to signify our pride at being part of such a significant milestone, both our cars will carry a special 'F1 1000' logo.

The second round of the championship in Bahrain proved a difficult one for the team, but two productive days of testing after the Grand Prix in Sakhir have helped further our understanding of the FW42. Robert now returns to a track where he recorded a best result of fifth in 2010, whereas this will be George's first experience of the Herman Tilke designed Shanghai International Circuit.

Dave Robson, Senior Race Engineer: The 16th running of the Chinese Grand Prix marks the 1000th Formula One World Championship race since the inception of the FIA World Championship in 1950. This landmark event takes place on the Shanghai International Circuit, which features a long signature back straight and the iconic low-speed complex of T1/2/3. The weather is often cool in Shanghai in April, and the risk of rain is frequently high. This threat of rain, combined with the layout of the circuit, can lead to a spread of set-up choices amongst the teams and drivers.

Following the race and test in Bahrain, we will continue to test and evaluate during Friday practice sessions to further our understanding of the FW42. Pirelli have made available the C2, C3 & C4 compounds at this event, which is one step softer than those taken to Bahrain. We will complement our own testing with runs to assess the behaviour of these tyres around the unique 5.5km challenge of the Shanghai circuit.

Robert Kubica: We have a number of very different circuits at the beginning of the year with varying characteristics, which allows the teams to discover a great deal about their car. China can be very changeable and challenging. It has a lot of long tight corners, such as the first three turns, combined with low speed hairpins, high-speed corners, and very long straights ending with heavy braking. These conditions along with the changeable weather means it can be a challenge to set-up the car. We will have to wait and see what the weather does, but I am looking forward to driving in China once again. Finally, it will be a privilege to drive in the 1000th Grand Prix in Formula One; it is a big achievement for all the F1 world and for the fans. It will make me very happy and proud to have the opportunity to participate.

George Russell: I am really looking forward to China as it is a circuit I have never raced at before. It is always a great experience driving on a new track. It is the 1000th Grand Prix for Formula One so it is great to be one of the 20 drivers that are a part of that. There is so much history in the sport and this will be a historic race, so I am extremely proud to be lining up on the grid in Shanghai.