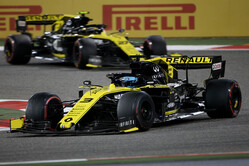 Following its mixed fortunes in Melbourne, Renault was looking at a little redemption on Sunday, despite Nico Hulkenberg's failure to make it beyond Q1 on Saturday.

Hulkenberg and teammate Daniel Ricciardo were running sixth and ninth, with just three laps remaining, when first the German pulled off track, followed, moments later, by the Australian.

With Ricciardo's car "electrically unsafe" as a result of an engine issue, which meant he was unable to replace the steering wheel after being told to "jump from the car", the safety car was deployed, which, if nothing else, was to allow Charles Leclerc to hold off Max Verstappen for third.

While Hulkenberg's retirement was due to an engine issue, Ricciardo was sidelined by an MGU-K problem.

As a result of the double DNF - though both cars are officially classified as finishers - the French team drops to ninth in the standings, while Ricciardo has yet to open his points account.

"After a very intense winter, it's been a very bad start to our racing season," said team boss Cyril Abiteboul, Renault now having slipped behind Honda in the engine standings.

"Similar to Melbourne, our qualifying was massively compromised by minor electronics issues, which impacted both cars," he continued. "These are issues we have previously encountered but something we were unable to rectify in Bahrain. These problems are increasingly frustrating and unacceptable as both cars have shown very good competitiveness both over one-lap and race runs.

"Nico delivered another outstanding drive from 17th to sixth," he added. "Daniel is building on precious experience in the car, and despite good race pace, his strategy gamble didn't work out. We must react and shift our focus on reliability."

"Renault blowing up unfortunately didn't help us see the podium," said the Briton, referring to the resultant safety car which thwarted Verstappen's hopes of a second podium of the year. "It's ironic, isn't it? Whether they're in the car or out of the car!"

With David Beckham, husband, like Horner, to a Spice Girl, a guest of Red Bull, perhaps Renault should consider inviting another member of the pop princesses to a future race.