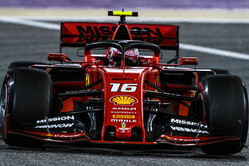 Ahead of the season opener we had Lewis Hamilton insisting that Mercedes was on the back foot - a claim we have grown used to over the last five years as the German team won 74% of the races and every title - the Briton strenuously insisting that his belief was not BS.

Of course, as we know, the Ferraris were totally trounced in Melbourne, 0.7s off the pace in qualifying and a distant fourth and fifth on race day.

Yesterday, the Maranello outfit was first and second in both sessions, however, team boss Mattia Binotto insisted that all was not what it appeared and that the team was experimenting with engines modes.

Lo and behold, this morning, in the race sims, the Ferrari enjoy another 1-2, finishing 0.7s clear of the leading Mercedes.

As we said, it's getting a bit silly.

So, leaving Ferrari and Mercedes to do whatever it is they are going to do, this morning's session saw no less than three drivers finish ahead of Max Verstappen, while his Red Bull teammate, Pierre Gasly, was further down the order.

Those ahead of Verstappen were Grosjean, Hulkenberg and Norris, and with Sainz ninth, this is shaping up to be a strong weekend for McLaren. And about time too, you say.

Indeed, behind Ferrari and Mercedes, Grosjean is one of five drivers covered by just 0.147s, indeed, 5th to 17th is covered by less than a second, such is the competitive ferocity of the midfield this year.

One interesting aspect going into qualifying is that a number of drivers appear - and yes, we know it's only the second race of the season - to be losing ground to their teammates, we talk of Gasly, Ricciardo, Albon and Giovinazzi in particular. Early days, but an aspect that certain team bosses will be watching, especially with the likes of Esteban Ocon in the wings.

Going into this evening's session, temperatures will significantly lower than FP3, while the wind, which caused for a number of drivers earlier, appears to be dropping.

The soft tyres appear to be good only for one fast lap, but with an eye on tomorrow's race, tyre strategy is going to be important.

The cooler temperatures of FP2 saw the fastest times of the weekend thus far, but we also saw drivers struggling for grip, especially in the opening stages of their out laps. Mistakes, such as Raikkonen spinning after just two corners, could prove costly over the next hour.

The lights go green and Kubica leads the way, followed by Russell and Albon.

Bottas is the first of the big guns to head out, but he has plenty of company as 16 other drivers follow him.

Norris does well to avoid Grosjean, who appears to impede the McLaren. Nonetheless, the Briton goes quickest with a 30.406. "This guy just blocked me in the final corner," reports Norris.

No sooner has Kvyat gone third than he is demoted when Bottas posts 29.948 to go quickest. Moments later however, Leclerc posts 28.495 to go top.

The stewards are to investigate the Norris / Grosjean incident.

Sainz goes fourth, ahead of Magnussen, Verstappen, Grosjean and Hamilton, the world champion over a second off the pace.

Replay shows a beautiful, but costly, slide for Hamilton. Undaunted, he stays out and attempts anther lap. PBs in all three sectors see the world champion go third with a 29.262, still 0.7s off Leclerc's pace.

With one minute remaining, Kvyat, Giovinazzi and Perez comprise the drop zone, along with the Williams duo. Stroll, Norris and Hulkenberg are hovering.

Raikkonen remains 11th as Albon goes 6th and Stroll improves to 15th only to be demoted again when Ricciardo goes 11th. Indeed, the Australian makes the cut while teammate Hulkenberg doesn't.

No offence, but it's like they pulled some of those names out of a hat. Imagine if the grid looks like that.

It is several minutes into Q2 before a car finally emerges, and it's Bottas, who is followed by Norris, Albon, Sainz, Magnussen and Hamilton. The Ferraris are among the last out.

The Silver Arrows trade fastest sectors, Bottas posts 28.830, while Raikkonen goes second only to be demoted by the Haas duo.

A 28.578 sees Hamilton go quickest, as the Ferraris begin their hot laps.

Leclerc is quickest in the first two sectors, as Norris goes fourth overall.

Leclerc posts 28.046 to go top, while Vettel can only manage sixth as he posts 29.233. Replay shows Leclerc running wide in the final corner, but no idea where Vettel lost time.

Ah-ha, it appears Vettel had a massive lock-up at T10. "That was the worst (flat) spot ever," reports the German.

As the final assault gets underway, Ricciardo, Gasly, Kvyat, Albon and Perez comprise the drop zone.

Grosjean is first out, followed by Magnussen, Vettel, Norris...

Magnussen is on new softs, as is Vettel, who is slowly running out of the red-banded tyres.

A PB in S1 for Grosjean who is using all the track, and then some. A PB in the opening sector for Perez also.

Grosjean improves to seventh with a 29.249, but is it enough?

Norris improves to eighth as Vettel posts 28.356 to go second.

Gasly reports a problem with his throttle, while Albon made a mistake in the final corner.

On the evidence thus far it looks like we're going to have a Ferrari on pole, but will it be Leclerc or Vettel? Then again, can Hamilton dig deep - he usually can - or how about Bottas 2.0.

Fact is, Vettel really needs to stamp his authority in this session, for fear that Leclerc emulates Ricciardo's achievements at Red Bull in his first season with the same consequences.

The lights go green and there are soon 8 drivers on track, Vettel and Verstappen holding back. Indeed, Vettel is not even in his car!

Clearly, Vettel and Verstappen are going for the one lap.

As the drivers begin to head out for the final assault, Vettel is one of the last to head out, though he leaves Hamilton, Bottas and Leclerc still in their garages. Verstappen is also on track.

Vettel can only manage a PB in S1, as a number of other drivers also post PBs.

It's another PB in S2 for Vettel, as Leclerc goes quickest in S1.

Vettel crosses the line at 28.160 to go second, and though Leclerc appears to have pole, he maintains a strong pace.

Indeed, Leclerc consolidates top spot with a 27.866, as Hamilton goes third ahead of his Mercedes teammate.

Verstappen mangers to take fifth from Magnussen, as Sainz takes seventh, ahead of Grosjean, Raikkonen and Norris.

In the Ferrari garage the team applauds Leclerc as the youngster becomes the second-youngest ever pole-sitter, just 23 races into his career.

Meanwhile, Hamilton and Bottas manged to get that gap down to 0.4s, which is a lot better than 0.7.

To sum up, Leclerc starts from pole, ahead of Vettel, Hamilton, Bottas, Verstappen, Magnussen, Sainz, Grosjean, Raikkonen and Norris.

While Mercedes eventually closed the gap to Ferrari, it was clear yesterday that the SF90 has strong long run pace, though using an extra set of tyres could come to haunt Vettel.

Also, the engine mode in the W10 will have been partying like it was 1999 as Mercedes pulled out all the stops to keep in touch with its rival. However, throughout the weekend both Hamilton and Bottas have been struggling for balance, and one cannot help but feel that - for once - the Silver Arrows really is the 'underdog'.

Verstappen did well to take fifth, but how about Magnussen and Sainz, McLaren, with two cars in the top ten, looking a little more like its old self.

Though he qualified 8th, it is likely Grosjean will be the first driver to incur a grid penalty this season, the Frenchman's impeding of Norris in Q1 totally unnecessary, but sadly typical.

A number of drivers are starting out of position, most notably Gasly, Perez and Hulkenberg, however, the nature of the track, not to mention a third DRS zone, should ensure some fun tomorrow.

He impressed in Melbourne, but did we really believe Leclerc would be establishing himself so quickly? Seems, Ferrari, and indeed F1, has a new star in the making.

Now, can he convert that maiden pole into his first win?