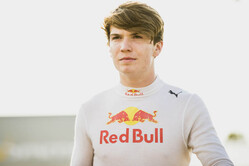 Londoner, Dan Ticktum will make his F1 debut next week when he shares driving duties with Max Verstappen for Red Bull at the first in-season test of the year.

Ticktum, who has previously driven non-contemporary F1 cars, has been a member of the Red Bull junior team since 2017 and following a successful 2018 campaign in the FIA Formula 3 European championship, where he finished second, coupled with consecutive Macau Grand Prix victories, he will now take the next step with an official F1 test in the RB15.

2019 sees Ticktum, who made his F2 debut in the final round of the season in Abu Dhabi, continue his racing education, competing in Japan’s highly competitive Super Formula championship with Honda for Mugen Motorsport.

In 2015, Ticktum was given a two-year ban from motorsport following an incident in an MSA Formula race at Silverstone, on his return to the sport - one year of the ban being suspended - he contested the final round of the FIA European Formula 3 Championship in Hockenheim with Carlin.

Previously linked with the test driver role at Red Bull in 2018, the Briton did not have the necessary superlicence points, while his failure to beat Mick Schumacher in the European Formula 3 Championship last year meant he didn't have the requisite number of points to take the seat alongside Daniil Kvyat at Toro Rosso.