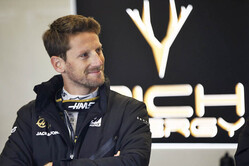 Q3 featured the heavy hitters of Formula One, with five-time and reigning champion Mercedes, 16-time champion Scuderia Ferrari and four-time champion Red Bull all represented. Rich Energy Haas F1 Team held its own among these giants, with Grosjean qualifying a best-of-the-rest sixth with a lap of 1:21.826 and Magnussen taking seventh with a lap of 1:22.099.

Before Grosjean, Magnussen and the rest of their Formula One counterparts participated in knockout qualifying, they had one final practice (FP3) to dial in their racecars for a quick lap around the track. Both drivers ran similar programs, beginning with an installation lap on the White hard tire before switching to softs for the remainder of the session.

Romain Grosjean: "P6 on the grid, that's good. It's been a good day, especially with Kevin (Magnussen) up there too. The car's been performing well, on a track that we've always been competitive at, so that's good. It's the first time we've really run the full qualifying set-up, so that's been interesting for us to discover a bit more. The car worked well, and we're pretty much where we thought we were. There are maybe some surprises in the pecking order, but I'm very happy with our day. I think our race pace looks as good as we did in qualifying. We'll keep pushing, keep delivering, and hopefully we'll score some strong points to start the year."

Kevin Magnussen: "I didn't quite have the perfect qualifying session on my side, I made a mistake on my first tire in Q1, which meant I had to use another set, leaving me with only one new set for Q3. That's my bad, but fortunately the car was very good. I'm very proud of the team with what they've done to put such a good car on track again this year. They did a great job incorporating the new rule changes to allow us to maintain a competitive car. We're not even that far from the guys at the front, we're not fighting them, but we're not too far. Hopefully we can build on this tomorrow and score some good points."

Guenther Steiner: "It was a very good qualifying. The team worked very well over the winter to get us prepared. We simply executed today with what the team has done over the last ten months to develop the car and through testing. It's a very good day for Rich Energy Haas F1 Team, thanks go to the whole team."