Vettel: What was all that BS? 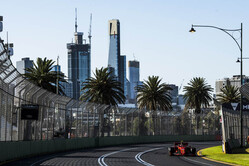 "What was all that bullshit about with them being out of shape and so on?" asked Sebastian Vettel as he faced the media following today's opening practice sessions. "I didn't understand that, to be honest."

The German was referring to the claims made in Barcelona by Lewis Hamilton, and again at the start of this weekend, as the Briton and his team insisted that Ferrari had the edge and the German team was on the back foot.

Just hours after making the comment in Spain, Hamilton went out and posted a best time within 0.010s of Vettel's best, while this morning both Mercedes were over 0.8s clear of the Ferrari.

"It was a bit of a surprise," admitted the German, "I think they looked really quick, and I don't know if it was just us struggling a bit today or others as well, but as a matter of fact they were in a league of their own.

"Maybe everyone else was struggling and then we can turn it around, but they looked very strong and much stronger than they claimed before the weekend."

Referring to his own team, which saw both drivers complaining of handling issues with their cars, Vettel said: "It was a tricky day for us and probably a tricky day for everyone. I think for us we are not where we would like to be, not in terms of lap time but in terms of car feel and handling.

"We didn't really get into the groove and rhythm," he admitted, "and that's quite important around here.

"If we can get that confidence and that groove back, there is a lot of lap time in that around here," he added. "I feel that I have the car under me, that I had in testing, but it is not doing the same thing here and there and that is why I am lacking confidence.

"But we are all here working flat out to try to understand what happened in the session, the things that we tried and how they changed it."

"At the end we are not flat-out, that's for sure," added teammate Leclerc, who was over a second off the pace. "We will only see in qualifying where we are exactly.

"Are we panicking? No, not yet," he insisted.