A change of tactic from Ferrari? 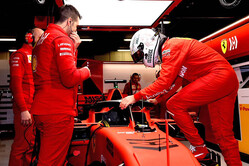 In a change from 'tradition', Ferrari is set to alternate its drivers over the course of the final four-day pre-season test at Barcelona.

Though some doubt the wisdom in not allowing drivers a full session in which to become fully acclimatised with the car, in addition to the extra work involved in adapting the car over the lunch break, it's a tactic which doesn't appear to have done Mercedes any harm over the years.

The German team first began alternating its drivers in this way part-way into 2014 pre-season test, while from 2017 it has become its regular practice.

This season has seen both Renault and Haas adopt a similar tactic in alternating its drivers.

Having pretty much dominated the first week of testing, in terms of pace and mileage, the second week sees the pressure ramped up and Ferrari clearly feels that this is one area where it can learn from its rival.