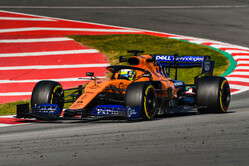 Three members of the McLaren team had to be treated after a fire broke out in the team's garage during a filming day at Barcelona.

"There was a small fire in the garage during the team's private filming day," confirmed a team spokesman.

"The fire was quickly extinguished by the team, and circuit emergency services and medical teams attended immediately in support," they added.

"Three team members were taken to the medical centre for treatment and were released shortly after."

It is not currently known what caused the fire, which happened a day after the opening pre-season test came to a close.

The Woking outfit is one of three teams on duty at the Spanish track today, taking full advantage of the filming day regulations, the team having earlier tweeted video of its 2019 contender on track with one its road cars.

Ironically, Barcelona was the scene of a fire in the Williams garage in 2012, just hours after Pastor Maldonado had scored a shock victory for the Grove outfit.