Rosberg: Bottas a lot better than he has been able to show 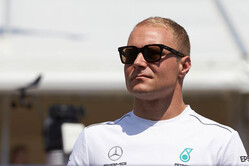 Be it pure bad luck, rookie-like mistakes or team orders, one can fully understand when Valtteri Bottas described 2018 as his "worst season ever".

Despite having the same car as his teammate, who scored 11 wins on his way to securing the title, not once did the Finn stand atop the podium, finishing the year fifth in the overall standings.

While Bottas has every reason to glance to the wings where Esteban Ocon is waiting anxiously, 2016 world champion Nico Rosberg believes the Finn is capable of delivering Lewis Hmilton a shock or two this season.

"Valtteri is a lot better than he's been able to show recently," the German tells Sky Sports News. "With a new season starting he has a good chance of establishing himself in a much stronger position and even really be annoying Lewis quite a lot.

"I think that's possible," he adds. "It always depends how the season starts.

"Last year he had a lot of bad luck as well. If the luck is on his side and he starts well, it could be a whole different situation."

Rosberg, who will resume his role as pundit for Sky and Sky Italia this year, is hoping to see his former team challenged, but admits that the onus is on the likes of Ferrari and Red Bull to close the gap.

"It's been an amazing run but it's not necessarily time for change," he said, "it's time for renewed battles up front, and then may the best team win. Mercedes has been the best recently. But we want it to go down to the wire, we want to see real action."

One of the main points of interest going into the new season, other than the new aero regulations, which are already being played down, is the prospect of Max Verstappen in the Honda-powered Red Bull.

"That would be so cool," he replied, when asked if the Dutch youngster might challenge for the title. "I hope that can work out for this year. There's a real possibility because the regulations have changed so much in terms of the cars, and everybody had to start from scratch."