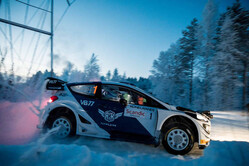 Mercedes driver Valtteri Bottas has made his rally debut, finishing fifth overall in the Arctic Lapland Rally, the opening round of the Finnish Rally Championship.

Though a 'rally rookie', the Finn had an advantage over his rivals in that he was at the wheel of an M-Sport Ford Fiesta WRC - in similar spec to M-Sport’s WRC drivers - while his rivals, though more experienced, were mostly at the wheel of cars used in WRC2

Bottas spent much of the rally pursuing Henrik Pietarinen's Skoda Fabia, but faded in the latter stages, the last two of which were claimed by Pietarinen.

"We finished my first ever rally 5th overall with a stage win today," tweeted Bottas after the event. "Tricky & enjoyable stages, so much fun."