Finally, a sensible move from Ferrari 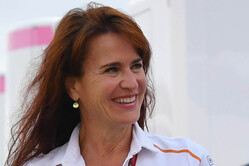 While fans and F1 insiders alike question the wisdom in 'promoting' technical boss Mattia Binotto to the role of team principal - a poisoned chalice if ever there was one - there comes unconfirmed news of an altogether more sensible change at Maranello.

Earlier this week, McLaren revealed the departure of its media manager, Silvia Hoffer Frangipane, who had chosen to leave Woking for "a new opportunity, after nine years of unfaltering service".

It appears that said "new opportunity" is the role of communications boss at Ferrari where she will replace Alberto Antonini.

Antonini, formerly an F1 journalist and TV commentator for RAI and Sky Italia, was recruited by Maurizio Arrivabene just days after his arrival at Maranello, and it's fair to say that despite coming from a media background managed to make the Italian team the most media-unfriendly, uncooperative team in the paddock.

Now, following the departure of Arrivabene, it would appear that the Maranello outfit is looking to give its communications team a much needed overhaul, and who better than Hoffer Frangipane who was recruited to McLaren by Matt Bishop.

Having worked with Bugatti and then Ducati in PR roles, Hoffer Frangipane moved to F1 in 1997 with Minardi, subsequently joining Williams where she spent ten years before getting the call from Woking.

Known for her cool under pressure attitude, her professionalism and charm, Hoffer Frangipane will make a welcome addition to the Scuderia.

However, having worked closely with Fernando Alonso during his time(s) at McLaren - including during his 2017 Indy 500 bid - some are taking her recruitment as a possible sign that the Spaniard could return to Maranello.

In keeping with Ferrari's traditional approach to the media in recent years, there is no official word from the Italian team on Hoffer Frangipane's recruitment at present.